Crashworthiness: When Ideals and the Real World Collide on the Road

Given the importance that automotive consumers place on the crashworthiness of their cars, it's little wonder that manufacturers heavily promote their crashworthiness tests, and their NHTSA ratings, in product advertising. 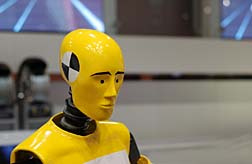 Images of vehicles slamming head-on into cement walls, glass and metal flying everywhere, are common on our TV screens as the car companies fall all over themselves in an attempt to convince us that their vehicle carries the best chance for survivability.

However, upon closer examination the crashworthiness testing that is done may not adequately reflect real-world situations. It is also alleged that the NHTSA rating system is painfully outdated.

Granted, cars are a lot safer than they used to be. With airbags and side curtains, modern safety harnesses and cars designed with impact frames and crumple zones, the chances of surviving a serious accident are much improved. But it's a relative comfort, when you factor in the proliferation of smaller cars. True, the old land yachts of the 1970s didn't have air bags, but they had huge mainframes underneath, and the driver was surrounded by literally a ton of sheet metal. Back then there was a lot more car to crumple.

On modern cars that mainframe is gone, and there's a lot less sheet metal between you and the other guy - hence the need for supplementary safety systems.

But they have to work, to be effective.

A class action lawsuit filed in Ft. Lauderdale makes that very point. A class action was filed on behalf of Arnold Rosen of Boca Raton, and other owners of the Lexus ES350. The suit alleges that a weight sensor located under the front passenger seat can fail, resulting in the prevention of the right front airbag deploying during a collision. In other words, if the sensor does not register the presence of a passenger in the car, the airbag will simply not deploy in a collision, as the car interprets the failure as zero presence...that there is no one sitting there.

Rosen leases two cars, neither of which has a passenger airbag sensor that is fully functional. The suit alleges that Lexus has refused to fix the problem.

In another lawsuit - and again from Florida - a brain injury victim was awarded $32.5 million for injuries suffered when his seat harness failed to lock up and properly restrain him during a head-on collision. The failure was traced to a defect in the seat belt mechanism, and both Ford Motor Company and Mazda Motor Corp. were found to be negligent.

The U.S. Department of Transportation reports that there are over six million traffic collisions per year, and half of which result in injury to some, or all of the occupants. Of those three million injuries, statistics reveal that 2 million are permanent, and that 40,000 do not survive.

Hence the need for the National Highway Traffic Safety Administration to keep pace with what's going down on the nation's roads, and to regulate accordingly. While the NHTSA continues in its mandate to require ongoing testing by the manufacturers, the criteria for those tests is sadly lacking in many areas, including real-world scenarios such as collisions with narrow objects, or collisions between small and large vehicles.

Back to those images on our TV screens of cars slamming head-on into brick walls. It may be comforting to know that we would survive a head-on collision with a brick wall. But how often does that happen? What does the crash test dummy look like after the car has slammed into a light standard or utility pole?

Or what happens when the new, pint-sized Smart cars tangle with a cement truck? The very thought of that might prove unsettling, but given the increase in truck traffic on the nation's highways and the continuing presence of even smaller cars - all sharing the same patch of pavement - it's reality.

And here is where the NHTSA, some suggest, has dropped the ball. The agency itself admits that it is not yet capable of determining crashworthiness in situations noted above.

More News
And regulations have been in need of an update for so long, practically every new model introduced into the marketplace qualifies for the once-prestigious five-star rating.

The NHTSA has also been criticized for regional releases of recalls, where a recall might be announced in New York, for example - but not publicized in the remainder of the country.

The good news is that cars have come a long way since 1965, when Ralph Nader's book, Unsafe at Any Speed, galvanized Congress and the public conscience on the issue of automotive safety, and put the industry on a pathway to rigid standards that began with seat belts, collapsing steering columns and padded dashboards.

However, that only works if manufacturers, and the regulatory authority they report to, are held accountable.