Donna, aged 63, filed an age discrimination complaint against her employer when part of her job was given to a "young kid." A few months later, instead of getting her job of 30 years back, she was told it was eliminated. And so was she. Her employer should get acquainted with the California labor law.

Donna thinks that the worst part is that she is not eligible for Medicare and that most of her income will go to health insurance. But she doesn't have to accept the meager severance package she was offered; instead she can file, along with countless others in her position, an age discrimination lawsuit against the company. 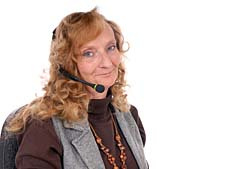 "I was employed for 30 years as a freight and transportation manager, shipping motion picture cameras all over the world," says Donna. "About a year ago my boss told me that part of my job was going to be taken away—the receiving part—to a young kid." She could handle that, even though there wasn't a lot to do. But six months later, they took her shipping duties away, which left her nothing to do except handle freight.

"In the meantime, my boss wouldn't talk, she could only yell at me, for no reason; she was being really nasty," says Donna. "My boss also told me I was of the old mindset and one time she said, 'I had a dream and you were telling me you were going to retire.' She thought it was funny-- I didn't.

"Finally it all came to a head. My boss said, 'Get over yourself.' What does this mean? I got a lawyer and filed an age discrimination complaint with the HR department.

I told HR they were taking 75 percent of my job away and I haven't been told what is going on, what are my responsibilities. I got a new boss and things were OK but on January 22nd, the president of operations called me into her office and told me that my job was eliminated. The HR guy was there while she handed me some paperwork and they walked me out of the building, right then and there, after 30 years. They also told me that I could come back on Saturday -four days later—and clean out my office.

The sad part is that I have to go on COBRA insurance. My employer has to give me this insurance for 18 months but it amounts to $350 per month. I did get a severance package but I didn't agree to it and I didn't sign anything. The package amounts to 20 weeks of regular pay.

The severance agreement says 'if you agree not to sue us, we will give you $7,000 more plus six months of COBRA insurance."

I haven't done the math yet. I talked to someone and he told me that this form is legal and that California has an 'at will employee' which means that you can let them go for no reason at all. But I think that is against the law. Where are my constitutional rights? I was discriminated against because of my age.

And I also know that my job wasn't 'eliminated.' My son is a customer and this kid [who replaced me] told him that he was sorry he took my job away. The kid got 100 percent of my job, without training! My job wasn't eliminated because this kid is doing it. They eliminated me.

My issue is that I am 63. They fired me; I don't have an income and who is going to hire me? Insurance is the issue here. If I had worked two more years I would have been eligible for Medicare.

I am dumbfounded that you can work for someone for 30 years and get treated this way.
I haven't got one job interview yet and I sent out 10 applications. When potential employers see 30 years experience, they think 'too old'. It is going to be a real financial burden for me.

I will get $1,500 from social security if I file now. And $350 of that has to go to insurance and the rest I can live off. But that doesn't even cover my rent. I am single; what can I do? I am going to pursue a full-time job but it isn't looking great. It seems like I might have to collect social security and find a part-time job. But that means I can only make $13,000 before taxes.

I hope to get my insurance and maybe some pain and suffering out of a lawsuit. This company really wore me out in the last few years. It was very humiliating to be laid off and escorted out of the building immediately. I didn't even get a chance to say goodbye to anyone--just out the door."

The Facts
Age discrimination violations are increasing due to a number of regulations and enactments which prohibit any kind of unlawful discrimination. At the same time, human expectancy is rising and employees can remain productive in their jobs for a longer number of years.

Protection against age discrimination in matters of employment is of utmost importance. People cannot be discriminated against only because of their age. Such discrimination violations also apply to training, promotions and advancements.

It is the duty of an employer to duty to provide an atmosphere free of discrimination against age, sex and affiliations. Of all the equal opportunities laws applicable, this is the most important right available to existing and potential employees.

California labor laws and various municipal regulations provide protection against discrimination in matters of all employments. Age Discrimination in Employment Act of 1967 (ADEA) is the federal law which provides protection to all employees: take a look at the act to know your rights.

More News
On February 5, 2007 The Examiner reported that, because of a recent US Supreme Court decision on a landmark age-bias case, "workers can sue employers whose policies discriminate on the basis of age -- even if the policy isn't discriminatory on its face. At the same time, the decision says employers can prevail in defending those same suits simply by demonstrating a legitimate business reason for the policies that have the effect of treating older workers less favorably."

This decision is seen as a victory for workers. A spokesperson for AARP Litigation Foundation, the Washington, DC-based legal arm of the lobby group for older Americans explains that "The high court's decision puts employers on notice that they must look out for potential age bias in all their policies."

Donna is going to file a lawsuit against the company that fired her.

Posted by
mtowers
on November 16, 2012
As a recent job seeker over 50, the companies I am interviewing with have almost nobody except C level employees over 50. I am wondering if hiring practices by age are tracked anywhere. I have been told by HR and headhunters that regardless of my qualifications or experience it is unlikely a large company will hire be because of my age 51.

What can I do about this?