Legal team representing a 44-year-old African American man who claims he was harassed and discriminated against while working as an assembly line worker at the Tesla car factory in Fremont, California is adding a charge of retaliation to the already long list of claims of violations of the California state labor laws. 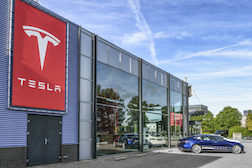 DeWitt Lambert, who says Tesla management ignored his complaints and allowed co-workers to taunt him in his workplace with the “N-word” and other racial slurs, was placed on administrative leave by the company in March 2017 after the lawsuit he filed against the company began to be widely reported in the media.

However, Lambert’s attorney, Lawrence A. Organ from the California Civil Rights Law Group in Oakland, California says the company is not paying Lambert what it should be paying someone on administrative leave.

“Usually when you are on administrative leave that means you get the pay you usually get,” adds Organ. “He is not getting that – I think that is retaliation.”

Lambert is an electrician by trade and moved to California from Alabama in 2012. He finally landed his dream job with Tesla in April of 2016 at the Fremont, California plant where he worked on the Tesla S model.

According to the documents filed and the state of claim almost immediately Lambert began to be routinely subjected to harassing behavior by four male colleagues, all of whom were in their 20s. They filled his pockets with nuts and screws, they made comments about the size of his penis, they repeatedly used the “N-word”, they stole his phone and left video messages on it even threatening his family. On one occasion one of the men placed a drill gun into Lambert’s buttocks while the others looked on.

In approximately October 2015, the harassment and violent threats taking place were recorded on Lambert's iPhone. A transcript of the recording was included in the state of claim.

“Nigger, we take your ass home, nigger. Shred you up in pieces, nigger. Cut you up, nigger. Send your ass so everyone in your family so everybody can have a piece of you, nigger. Straight up, nigger. We get down like that, nigger.”

Lambert was quoted in a March 27, 2017 press release from Lawrence Organ’s firm saying, “"When I began working at Tesla I was happier than I've ever been. Now, I've experienced discrimination worse than anything I experienced growing up in Alabama and I'm scared for my safety every evening when I leave the plant. I asked for help from Tesla's management and it never came."

More CALIFORNIA LABOR LAW News
Tesla is currently asking the courts to move Lambert’s complaints to arbitration for resolution. In response to a request for comment a Tesla spokesperson said, “We believe strongly in having a good working environment and that people should look forward to coming to work every day. When we hear complaints or concerns raised by our employees, we take them very seriously.”

Tesla vehemently denies any wrongdoing and in a statement provided to LAS made clear Tesla believes DeWitt Lambert also participated in negative workplace events. “We have terminated several employees based on what we have learned and have suspended Dewitt with pay so that we can finish investigating the circumstances of the instant messages that were just provided to us about his threats of violence against coworkers. We will continue to take action as necessary, including parting ways with anyone whose behavior prevents Tesla from being a great place to work,” the Tesla statement said.