Tashara worked at a company that continually violated California labor laws. And she was continually taken advantage of. “Even my mom told me that I was getting abused,” says Tashara. 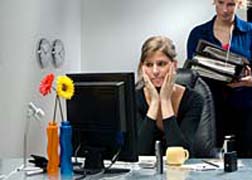 It’s a sad commentary: Someone fresh out of school and eager winds up working without a lunch break or rest breaks, day in and day out. Sounds like feudal times, but Tashara filed a California labor violation complaint just last month. Luckily Tashara listened to her mother, who is familiar with California overtime laws.

“I was hired by a small company, where everyone does each other’s job, sharing work and responsibilities,” says Tashara. “I was OK with this at first; I was hired to head up customer services and purchase orders. I started training in the warehouse to learn all aspects of the entire business---I agreed to my salary and working a few ‘extra hours’ now and again.”

Tashara was told that her normal schedule was 7:30-4:30, five days a week. The first day she left at 7pm. And the next day. And it went on… "It was like that the whole week, they were always needing me to do more things,” Tashara explains. “I should have seen the red flag right then and there.”

But she didn’t. Like so many workers, Tashara didn’t want to rock the boat. The only reason she stayed so late was fear of losing her job. “I was really stressed out and I was getting migraines, it was affecting my health,” she says. “I even needed a prescription for headaches. My mom said I shouldn’t stay so late so I started to leave at the time I was supposed to--4:30. My manager got very upset; the work was piling up and it was impossible to catch up.

"The second week I trained in the office. My manager trained me after I was supposed to be clocked off work. Nobody took breaks and most of the time nobody took lunch. It was so busy and there was so much pressure.

"They had a grueling training schedule and after two weeks it was sink or swim, I was on my own. It was like my co-workers couldn’t wait until I finished training. I guess they were passing the buck. The owner apologized several times and she took me for lunch. The managers gave me a gift card, yadda yadda. But I still didn’t get any overtime compensation.

"Six weeks into the job my manager sat down with me and said I needed to let her know if I was getting behind. She warned me. Then the owner got involved--after I talked to the manager about how stressed out I was. And I was still learning about the company but she just expected me to do everything. She said I needed more training but I was always the last one in the office--no one was there to train me.

More CALIFORNIA LABOR LAW News
"If I was promised more money maybe in the beginning I would have accepted, but I never discussed financial compensation. I never talked about overtime or missed breaks with anyone. I am more disgusted with my co-workers, saying they were too busy and had to eat lunch at their desks. It’s not right, the work culture of this company.”

Tashara left after seven months. She found another job with a decent salary, where everyone takes breaks and she works eight hour days. “This company is civilized,” she says. “Managers don’t pressure me to get more work done, so now I have a life. I’m not a slave to my work, nor am I being taken advantage of. It is too bad that others can’t stand up for their rights. If we all said NO to labor law violations, maybe they wouldn’t be so pervasive in California.”