Tina Robbins suffered so much verbal abuse at LA County that she left town. The final straw came when her supervisor planned on phoning the child abuse hotline to report Tina - to her co-workers! Even employees in the public sector don't abide by California's labor laws.

"It all started in February 2005 when a new supervisor was transferred to our unit in LA County. I was a children's social worker, investigating child abuse and writing reports to the court," says Tina. "From day one, it was obvious she didn't like me and nobody could figure out why." 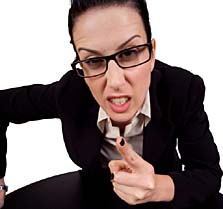 "Shortly after Linda arrived, I told her that I was pregnant. It was a custom in our office (with more than a hundred employees) that the supervisor arranges to give a baby shower to everyone expecting - even the fathers. Except for me. On several occasions my co-workers asked Linda when she was going to schedule my shower but her response was always the same: she was too busy and would get to it later.

As well, she gave me the worst cases, the ones involving six or more children with multiple issues, so I ended up with more cases than anyone else: I was swamped with work. But this is what really got to me: she told my colleagues that I was talking about them behind their backs - none of us knew what she was talking about and I had no idea why she was so malicious.

I never did have a baby shower. When I went on maternity leave she didn't even phone to see how I was doing. My co-workers couldn't understand her behavior. When it was time for me to come back - I had been gone for six months - I expressed concern (in a letter) about her attitude and harassment to her supervisor.

The final incident came after she refused to give me time off. I was having migraines and my doctor instructed me to take four weeks medical leave. The same day I gave her my doctor's note, I received a phone call from another supervisor warning me that Linda was going to call in a referral to the child abuse hotline - on me! She told other supervisors that I was suffering from post-partum depression and my kids were in danger.

For days, anytime the phone rang or someone came to the door, I was petrified. What if people on the hotline had acted on the call? If they did send someone over, it would be a co-worker coming to my home to investigate me. I can't think of anything more humiliating. My husband was a stay-at-home dad and they even knew that!

More News
When my medical leave was up, I quit. The thought of going back to work in that gossip mill, in such a hostile environment, was ridiculous. Instead we moved to Houston, after I had lived and worked in San Pedro most of my life, all my friends and family are there.

But my co-workers kept in touch with me. Apparently she still walks by my old cubicle singing "Ding Dong the Witch is Dead.' I wanted the whole thing to go away but after eight months she is still slandering me, to anyone that will listen. To this day, I have no idea why she took all her anger out on me.

It seems like the normal rules of conduct and what is appropriate in the workplace do not apply at LA County. The bosses are aware of everything that goes on yet they do nothing to stop abuse and harassment. It's like another world. There is no way people like Linda could keep their jobs in the private sector. Where else can your supervisor call you "asshole" and get away with it? Verbal abuse is so rampant that we all thought it was normal.

If your employer has been abusive, or failed to pay you for overtime, please send your complaint to a [California Labor Law] lawyer who will evaluate your claim for free.
Request Legal Help Now