All Disney employees are entitled to minimum wage, from bellhop to barista, Mickie and Minnie. But five current and former workers claim that the entertainment behemoth has violated the California labor law by failing to pay its workers minimum wage, failing to pay overtime and all wages owed at termination. 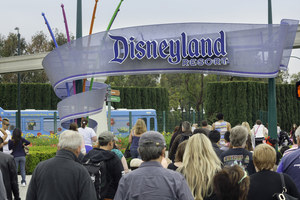 The workers hit Walt Disney Co. and its resort subsidiaries with a proposed class action in state court, alleging Disney and Sodexo Inc. (which runs food services including Starbucks) hasn't complied with the city of Anaheim's minimum wage law--which has been in effect since Jan. 1, 2019-- despite receiving "massive subsidies" in the form of municipal tax rebates.

The five lead plaintiffs — a barista, a hotel bellhop, a cashier, a makeup artist and a banquet event server — earned between $12 and $14.25 per hour while working at the resort, according to the lawsuit. The case is Kathleen Grace et al. v. The Walt Disney Co. et al., case number 30-2019-01116850, in the Superior Court of the State of California for the County of Orange.


The Dispute is complicated and it goes back to a 1996 agreement with the city of Anaheim and Disney, “under which the city took out municipal bonds and gave Disney over $200 million to finance improvements to the California Adventure theme park, including the construction of a $90 million parking lot,” according to the lawsuit and reported by Law360.

The lawsuit states that Disneyland Resort has violated the requirements of Measure L, which the city of Anaheim passed in 2018. The ordinance requires all hospitality businesses who get city subsidies to pay employees at least $15 an hour, but there isn’t a similar Florida law for Disney World, which reached an agreement with its union coalition last year that raises the minimum wage to $15 an hour by October 2021, according to a report in the Los Angeles Times.

The Disneyland workers argue in their lawsuit that the Disneyland Resort is benefiting from a city subsidy because Anaheim is using tax dollars to pay off construction bonds for a six-story parking garage located in the resort. While most taxes come from Disney, bed taxes from hotels around Anaheim add to the coffers. And more than $35 million a year is collected by Disney from garage parking revenue. The city will transfer ownership of the garage to the resort when the 40-year bond is paid off.


While the plaintiffs’ attorneys say the garage is a subsidy, an Anaheim attorney and a Disneyland spokesperson say that Measure L does not apply to the resort. Measure L was approved by voters in late 2018. It requires hospitality businesses that accept a city subsidy to pay a minimum of $15 an hour, starting Jan. 1, 2019, with salaries rising $1 an hour every Jan. 1 until 2022. Once the wages reach $18 an hour, annual raises would then be tied to the cost of living.

More CALIFORNIA LABOR LAW News
The LA Times reports that, even for legal experts, this issue is not so clear-cut and a court may have to decide the definition of a city subsidy based on the intent of those who brought Measure L to Anaheim voters. One legal expert on public finance and tax incentives, Michael Thom, an assistant professor in public policy at USC, said that the financing agreement for the parking garage does not appear to be a subsidy because it does not return any taxes directly to the Disneyland Resort but instead uses them to pay off the construction bond.

If the workers win their argument--that because Anaheim is using tax dollars to pay off bonds for the garage and Disney is benefiting from city subsidies and is subject to the California wage and hour law, i.e., that the living wage law applies to Disney--more than 400 current and former Disneyland Resort workers could be owed millions of dollars in back wages.