Lawsuit may give thousands of IHHS workers overtime rights

Household workers, including those who care for the elderly or people with disabilities, are among the most vulnerable to wage theft and other forms of employment abuse. They work in isolation, behind closed doors and sometimes in fear of deportation. Ray v. County of Los Angeles cuts through the fog and fear to make clear that private litigants may recover unpaid overtime under the Fair Labor Standards Act (FLSA). The bigger picture is that the change in federal protection fills a gap in the legal safety net left under California’s Domestic Workers’ Bill of Rights, Wage Order 15 and other provisions of California labor employment law. 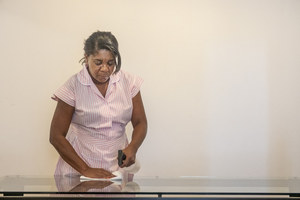 The lawsuit is especially important to the homecare employees who are employed through California’s In-Home Supportive Services (IHSS) program. In Los Angeles County alone, that may be as many as 170,000 workers. The ruling may also provide an opportunity for class action lawsuits for home care workers employed under different government programs.

A tradition of limited wage protections for in-home workers

But domestic workers have traditionally not benefitted from wage and hour protections under the FLSA. Protections under the California state labor laws have also been limited and have been filled with exceptions for designated groups of employees and employers. That has begun to change in piecemeal ways. Ray is an important piece for thousands of California’s IHHS workers.

But while the law extended broad coverage, it also exempted a subset of employees who provided services deemed “companionship care.” The slicing and dicing is extremely fine. “Companionship care” might include help with dressing or bathing as well as the taking of medications. The big picture is that while one hand gave, the other took a little bit away. The less skilled, less medical, workers lost out on overtime protection.

In 2013, the Department of Labor eliminated the companionship exception. The new rule, which would require minimum wage and overtime payments for this subset of workers, was to take effect January 1, 2015. Much litigation ensued. When the DOL ultimately prevailed, it announced that it would not seek to enforce the new rule until November 12, 2015. The decision in Ray challenges this position and allows a group of private plaintiffs to go back to the January 1, 2015 date.


In 2013, California enacted the Domestic Worker Bill of Rights (DWBR). This law, including changes to Wage Order No. 15, extended overtime pay rights to certain personal attendants working in the home who were not previously entitled to overtime pay. The state definition of “personal attendant” seems to roughly track the federal “companionship exemption.”

However, California personal attendants who are paid by state or county programs, like IHHS, remain uncovered by the DWBR. This is why the Ray decision is so important. It is not about just the effective date of FLSA changes. It is about the right to a legal remedy at all.

Many California workers find that they have more complete protection of employment rights under California law than they do under federal law. So it initially seems curious that the IHHS plaintiffs in Ray brought their collective lawsuit under federal provisions. This is one of those rare instances when federal law provides greater protections than state law. As such, it may prompt a re-examination of the exceptions available under the DWBR.

More CALIFORNIA LABOR LAW News
Ray can be read as a narrowly targeted decision. It permits the plaintiff IHHS caregivers to sue under the FLSA to recover unpaid overtime for the ten-and-a-half months between January 1, 2015 and November 12, 2015. It contains lots of legally interesting language about sovereign immunity under the Eleventh Amendment. (Rarely do employment lawsuits get to Constitutional issues.) It also provides a window into the trench warfare-like quality of lawsuits that involve the expansion of employee rights under federal law.

The bigger picture is that in-home workers have long struggled in isolation and near-invisibility to claim their legal employment rights. For California domestic workers who provide largely non-medical personal assistance to the elderly and people with disabilities, the decision represents an important step forward.