Diane Martinez is still working at Kaiser hospital, even though she has chronic, persistent asthma and severe back problems. "I know they are going to fire me and my union won't step in to help," she says. If Martinez is fired while under doctor's orders, this may be a violation of the California labor law.

"Kaiser hospital doesn't want to keep me around anymore because I have had to take sick days," says Martinez (not her real name pending a lawsuit). "I have been at this hospital for five years—I mix chemotherapy drugs. I am in union local 250 and they just tell me I have to talk to the shop steward. Which I have done several times. 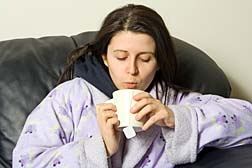 "When I returned to work in January (I had been off since Thanksgiving, in the hospital) everything was fine for a few days. Then I was called to the office, given my yearly review and that was fine. But immediately afterward, I was told verbally that the following day at 3pm I was expected to have a union rep with me to attend a disciplinary meeting. That was quite a surprise.

I called everyone I could find on the union list but nobody was available. All the reps were in a meeting. I think my boss knew this and planned it that way. I was stressed out and upset. But I attended the disciplinary meeting; they said that I was expected to be a professional and need to provide service to our customers and I was taking too much time off.

But I had a legitimate illness and had doctor's notes for every time I needed off. However, my boss was tired of it.

I worked the rest of the day and was suspended without pay. I was told not to return until the following Tuesday. I was told that I could return to my job on a modified work schedule. I was also told that my boss would check up on my absences and my work on a weekly basis. Fair enough.

I was also told that the suspension could lead to termination. The union rep advised me to resign rather than get fired. She had all the days I missed in front of her. I didn't return to work--the stress was too overwhelming. And I decided to do what my doctor recommended: to take at least three months off. Well, I tried to go back but it didn't work out.

I didn't get paid for that one day of work, the day I went to the meeting. I worked 8.5 hours that day. I clocked in by phone and gave my employee ID number with password. That is the procedure.

I called accounting and told an audit was being done because of all the time I missed. At the end of that pay period, I was expecting that 8.5 hours plus my banked sick time—I still had some accrued. They failed to pay me for hours worked but it did show hours for sick time. Then they said I was not eligible for sick time because I didn't meet the requirements coming back from absence. I have no idea what this means. My union wasn't helpful either. I contacted the workplace absence committee and payroll.

Payroll said that, in order to get sick time, I had to return to work for 30 days in a row. I have no idea if this is correct or not. It sounds like they are making things up as they go along.

They owe my 96 hours of sick time and 8.5 hours regular time. They also said that I wasn't entitled to vacation pay. All the time I took off for sick leave, I was paid state disability. My employer never paid me."

In California, you are not legally required to provide paid vacation or sick leave to your employees--yet. Currently, although employers do not have to pay for sick leave, it is paid out of the state's temporary disability program, which is funded entirely by mandatory withholdings from employees' paychecks.

If this bill is passed, California will be the first state in the US to force employers to provide sick leave benefits to their employees.

Bill AB 2716 states the following:
Any employee who works in California for seven more days in a calendar year - even those not necessarily based in California - would be entitled to paid sick time. Employees would accrue sick leave at a rate of at least one hour for every thirty hours worked, and would be eligible to use accrued sick time beginning on their 90th calendar day of employment. Small business employers (defined as those with 10 or fewer employees during at least 20 calendar weeks of the current or preceding year) could limit an employee's use of paid sick time to 40 hours or 5 days in each calendar year. All other employers would be allowed to cap usage at 72 hours or nine days per year.

AB 2716 also contains provisions prohibiting retaliation against employees for requesting and/or using paid sick leave. Much like the San Francisco law, the new bill imposes posting, notice, and recordkeeping requirements on employers. Also under AB 2716, employees may use their paid sick time for the diagnosis, care or treatment of health conditions of the employee or an employee's family member, or for leave related to domestic violence or sexual assault. Unused sick leave may be carried over from year to year.

Part of Section 233 of the current California Labor Law states the following:

More News
(A) The employee is physically or mentally unable to perform his
or her duties due to illness, injury, or a medical condition of the
employee.
(B) The absence is for the purpose of obtaining professional
diagnosis or treatment for a medical condition of the employee.
(C) The absence is for other medical reasons of the employee, such
as pregnancy or obtaining a physical examination.

234. An employer absence control policy that counts sick leave taken pursuant to Section 233 as an absence that may lead to or result in discipline, discharge, demotion, or suspension is a per se violation of Section 233. An employee working under this policy is entitled to appropriate legal and equitable relief pursuant to
Section 233.

Posted by
Diana Ceron
on June 10, 2014
I work for a company in a nursing home and every time some one call in or call in sick we have to call the DON to notified and she is very mad and always saying why we call in sick and weekends or she don't pick up dthe calls some of them don't have a insurance to go the doctor she star saying thing tha we lied or don't accept or call because she don't believe
Posted by
William Winburn
on November 16, 2013
I work for a large retail company and if you call in sick and do not have sick hours on the books you will get a no call no show and could be terminated even if you have a doctors note. They say a doctors note not required?. Is all about the point system. They are targeting employees who have been there the longest. I f you punch out too soon before your scheduled time to go home its monitored? Same for punches in and out for lunches. If you miss punch more than one time in a month you get a point. Its getting worse.
Posted by
Pamela
on September 5, 2011
I have been employed for 9 months and have called out sick I guess more than average so my supervisor says. Now an advanced position is opening and I am very qualified for this position and was promised this position when I was hired and that supervisor did not do what he said. Now this new supervisor says my call out sick is just a little above average and she would have no one to cover for me if I were to call out.
I have many years doing what I do and am qualified for this position. Can this company not give me this position for this reason?
Posted by
Joli yager
on June 9, 2011
I recently went on FMLA, intermitten leave, per HR's suggestion. 5-10 hours I could use if and when I needed it. This was my first time using FMLA/intermitten. I was told only a few HR Managers even knew about and we don't advertise it nor do we ever offer it....This happened 4 days after a huge investigation was launched in our department involving our 3 superiors. Well the work enviroment only got worse for me. The FMLA was accepted on 5/17, I told my boss almost dialy the work load that was still on my desk. They kept piling it on. My Manager was harrassing me daily, intimidating me and my work,...she said, " Well, you did this to yourself" the FMLA...so finally on 6/2 when I went in to work, the Benefits Director called me into her office. She said she spoke with my 2 bosses and they all decided that they were not going to able to accomodate the intermitten leave any longer (The leave which I have not even taken any time yet" She walked with me to my desk, told me to gather my things, and handed me a Leave of Absence form, partially filled out. I did not sign, my Supervisor did not sign, and the Dr. did not sign. I told her how can I be on LOA, legally? She said the Drs. Note covered it. I have the original right here. She lied. She said Corp. HR Manager would be calling me later that day.
I am still waiting. I am in limbo and feel like they are setting me up. I called a few attys. they are all real busy, but did agree, WC should be covering me, since the stress is well documented and very apparent for 5 years. Does anyone have any good advice as to my next move.

The environment has gotten so bad there, I can not go back. The know who the whistle Blowers were ...Thanks,
Joli

Posted by
Mayra G
on March 31, 2011
This exact same issue is happening to my husband who works in Kaiser at Downey, CA. Today he got called in by the director of ER to inform him that he can be written up for calling out for 2 days even though he had a Doctor's note validating his absence. He was informed that he must file FMLA when calling out sick!!! Is this correct?