Pamela and Martin have similar jobs: Pamela is a caregiver and Martin is also a caregiver—for dogs. They also have a similar problem regarding California labor law: both work 12-hour shifts and get paid a flat rate below minimum wage. 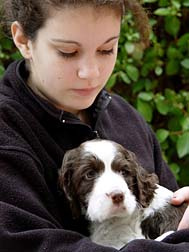 When Pamela began her caregiver job, she made about $9 per hour for three-hour shifts. Then her employer offered a 'flat rate' to work nights. "I thought the flat rate meant an 8-hour shift and anything more would be overtime," says Pamela. "My supervisor asked if I would work a 12-hour shift and I agreed. It wasn't until I got my first paycheck two weeks later that I found out I was only getting $70 per shift--$5.83 per hour.

'That is ridiculous-- it isn't even minimum wage, you know that is against the law,' I said to my supervisor. 'Well, that's what it is,' she replied. In other words, it wasn't going to change. But she would give me an extra $5—how generous."

"I can't live on that wage," says Pamela. "I arrive at my client's home at 9pm and sleep for a few hours during the night. Around 6am I let the dogs out and walk them around the neighborhood. I start to clean the house, make breakfast and leave at 9am although sometimes I stay longer, until the next caregiver arrives.

"My employer told me this flat rate is justified because I am sleeping on the job.
She has a franchise and I am one out of many caregivers on her payroll—they are also getting paid below minimum wage. Right now I am looking around for another job and definitely won't accept another flat rate."

Martin has been working at a dog kennel for almost three years and usually works a 12-hour nightshift.

"I knew the overnight people worked longer hours than day workers but I never agreed to any amount of a flat rate," says Martin. "I was also offered a commission so I accepted the job—somebody told me it was $1 per dog if at least 20 dogs stay with us. Turns out that was just hearsay.

I only knew about the flat rate when I got my first paycheck. My employer justified the flat rate because we are supposed to be sleeping and they say we shouldn't get paid overtime. There is a room with a bed, but it isn't easy with a pack of dogs running around. And we have to be on guard the entire night--that is the point of being there in the first place. The only thing that divides us from the dogs is a little gate.

On one occasion they found out that I tried to sleep with the bedroom door shut so they got on my case about that. It is just about impossible to sleep with the door open.
I haven't spoken to my employer because I might get fired. They will probably think I am threatening them."

More News
According to the California Labor Code, Pamela and Martin must be paid at least minimum wage—sleeping or not.

The Labor Code states that:
A minimum wage must be paid for all hours worked during a payroll period.

An employer can pay their employees on a piece rate basis. This means that the employee is not paid a salary or per time worked, but is paid a set amount for each project that is completed. A common example is auto mechanics that are paid a set amount for a type of repair, regardless of how long it takes them to actually perform the repair. Some employers mistakenly believe that piece rate workers are not exempt from the overtime and minimum wage requirements. Those wage rules, however do apply, and piece rate workers must be appropriately paid.

You should find out what kind of insurance this elderly couple has. They are likely covered under their insurance for caregiving up to X amount of dollars. Then you will know how much is actually out of pocket for your employers. By not paying you adequately you are being denied your maximum earned social security and disability/unemployment benefits should you ever need them.
It is always good practice to keep a small journal/daily log of your hours worked, all overtime, extra duties, amount paid ect....You do have significant rights and by California law your employers may pay you in room and board up to $750.00 a month the rest must be in monetary form. If there is monioes not being paid to you that you are owed after this amount is deducted then you should talked to an attorney specializing in workers rights/labor law...

Posted by
Shelly
on September 23, 2011
Hello My name is Shelly. I saw your post and wondered if you would be willing to share your knowledge on the ca state care giver laws or regulations in relation to how many hours is permitted by law of employment in a single week or month.
The ad I answered was for live in care giver to elderly woman preparing meals and assisting her with the rest room or if shes fallen and light house work in exchange for rent.

after I was hired and moved in, here is what was:

There was 1 other care giver total and now myself for the 24/7 care which is being demanded.

I am expected to also prepare meals for the womans husband. (which I dont mind)

I am expected to lift the woman into the bathtub and I have a long standing injury which prevents me from doing so (nothing was disclosed or discussed prior to hiring, nor was a probationary period stated). (this really isnt an issue as between the two of us we can bath our lady, but I would like discussed how that might be addressed in compliance with the law in case some thing serious requires the knowledge. thx)

The housework is not light house work. I would consider it - usual house work. constant dusting, vaccuming. cleaning 3 bathrooms, laundry, dishes, taking out the trash every other day and putting out and bring in the trash and recycling bins each week. Im guessing we are also expected to do heavy cleaning like the carpets and the oven regularly, etc...

As a new live in caregiver, I have questions about the laws. Ive been searching the internet for days and still have found nothing. I work 24 hour shifts about 3-5 days a week. The other care giver was trying out some new jobs and in "my" first two weeks I prepared 31 of the last 38 meals. I have had no sleep or continuously interupted sleep since I arrived. On a daily basis I find myself not getting anymore than a few hours of sleep and no breaks away from the home at all. I typically end up working 18-20 hours a day. I do not get compensated for the extra hours I work.

I can relate with the other girl who wrote you "Is there any law that i can use to help me? or anything i can do? im only in my early 20's and i find myself getting medical problems, losing my social life and pushing my fiance away, and im always tired and have the energy level of a 70 year old. Please help, I have no idea what i can do in my situation, but i really need to do something..."

The other caretaker and I have agreed to and come up with a schedule of 7 x 12 hour shifts each.
Still, absolutly unreasonable for the $850.00 mo. (calculated @ minimum wage) offered by way of the free room and board compensation. (the value of $850 is generous by any standard. the house is nothing fancy in a nice neighborhood.) That leaves us each working for free for aprox. 21 days per month as no additional compensation is issued. We (the other care taker and I-only one of us is curently driving. I realize thats our problem) have asked our employer for a few 3 hour periods, when its quiet, to attend church. Each time the request was made, it was denied. Clearly my employers aren't thinking clearly and are thrilled to be taking advantage of us and aparently not willing to allow us to work any less than 84 hours each week without breaks or lunch away from inside the home.

I know, I know - your advice is "get the hell out of there!" but honestly and for each of our individual reasons would like to choose to stay if possible. Both the other caregiver and I would prefer to remain with this dear elderly couple we've grown to love. We want them to beloved and cared for by those around them, which we do.

We would like to approach our employers and wish for there reasoning, and would like to be informed on the laws before we do. For our employers benefit, for ourselves and especially for our elderly friends we could use your input and knowledge desperatly. Our employers may realize its for everyones best interest - for themselves they will eliminate the revolving door of care givers if more reasonable and aware of that they really are asking grossly to much, for us because its devestating to have no value in your employers eyes and because I deserve to be treated humanly and fairly, and for our elderly couple who recieves good and loving care.
Cheers, Shelly.
Thank You.