The driver of a big rig involved in a deadly California car crash has been sent to prison. Although many California car accidents do not result in time in prison, in this case, the driver of a semi-truck was convicted of involuntary manslaughter in an accident that took the lives of two people. Victims who survive California auto accidents can suffer devastating injury, including traumatic brain injury and paralysis. 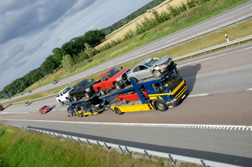 The truck driver involved in the car crash, Marcos Costa, was convicted of involuntary manslaughter after his big rig crashed into a vehicle carrying a man and his 12-year-old daughter, both of whom died in the accident. Costa was sentenced to seven years and four months in prison and ordered to pay $100,000 to a victim restitution fund. According to The Associated Press (09/08/11), Costa was driving a double-decker car hauler through the San Gabriel Mountains when his brakes failed.

In addition to the car carrying the deceased, Costa's truck ran into four other cars, a bookstore and a nail salon before stopping. Prosecutors noted that Costa was verbally warned that the road was unsafe for his truck and that he should turn around. Furthermore, he continued driving even though his brakes were smoking and, rather than waiting for them to cool, simply poured water on them.

Costa said he followed directions on his GPS taking him through the mountains and did not see any warning signs about using the route. Most truck drivers typically take the freeway through the area.

More CALIFORNIA CAR ACCIDENTS News
Meanwhile, a judge in California has decided not to dismiss a lawsuit concerning acceleration problems in certain Toyota vehicles. The first of potentially hundreds of lawsuits filed against Toyota is set to go to trial in 2013. Toyota filed a motion to throw the suit out of court, but the judge has tentatively rejected that motion.

The lawsuit, the first of multiple bellwether cases, involves a Utah crash in which two people died. According to CBS News (09/13/11), more than 14 million Toyota vehicles worldwide were recalled due to accelerator problems or brake defects. Multiple accidents were reportedly linked to Toyota accelerator problems, including the 2009 deaths of four people who died when the Lexus they were in accelerated out of control and crashed.

If you or a loved one have suffered losses in this case, please click the link below and your complaint will be sent to a personal injury lawyer who may evaluate your California Car Accidents claim at no cost or obligation.
Request Legal Help Now