More CALIFORNIA CAR ACCIDENTS News
A California car crash recently claimed the life of a San Ramon woman and injured another after authorities say her vehicle was pulled into the path of a pickup truck, the Contra Costa Times reports. 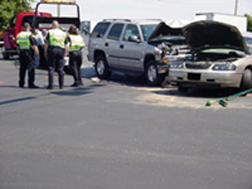 The accident reportedly took place around 3:40 pm on westbound Highway 12. The 64-year-old woman and her son were driving east toward Napa in a green Toyota Camry, according to Officer Julie Saraiva of the California Highway Patrol.

Saraiva added that the woman had reportedly pulled onto the shoulder on the right side of the road and attempted to make a U-turn. After pulling back onto the road, the woman drove into the path of an oncoming Toyota Tundra, which T-boned the sedan and crushed the driver's side.

The woman, whose name has not been released, was pronounced dead at the accident scene. Her son, who is in his early 20s, was taken by air ambulance to John Muir Medical Center, and authorities said he was conscious and talking prior to being taken away.

According to the National Highway Traffic Safety Administration, there were 3,434 traffic fatalities in the state of California in 2008.