Why Bother with Byetta?

Verdia was diagnosed with diabetes four years ago and her doctor prescribed a drug that caused her to gain even more weight—Verdia says she has always had a weight problem. Then Byetta came along, and with it the promise of controlling diabetes and weight. But Byetta wasn't the miracle diabetes drug it claimed to be. 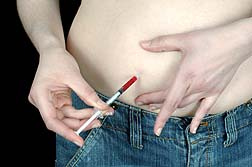 Verdia first heard about Byetta at something similar to a sales meeting. "I went to a meeting run by a nurse practitioner and she talked about this new medicine called Byetta that not only helped you control diabetes but also helped control your appetite," says Verdia. "She sold me on it and then my GP prescribed it.

"I started taking Byetta twice a day--I injected myself in the stomach. But it never did control my appetite nor did I lose any weight. I was also taking two other diabetes meds and Byetta was just like another extra diabetes drug. The manufacturer promised a lot of good things and didn't mention any side effects; and my doctor also said insulin wouldn't be needed if I took Byetta.

In 2006 I switched doctors and he took me off one of the diabetes drugs but I continued taking Byetta—right up until a few months ago. In late 2007 I had lapband weight loss surgery—where they put a ring around your stomach to lose weight. And it worked: I lost about 75 lbs and my blood sugar finally got under control.

During the last year that I took Byetta and I had a lot of problems with a pain that started in my lower back and shot down my left leg. It would also go across my abdomen-right around the area where I was giving myself the Byetta shots. I saw two different doctors and a chiropractor but nobody could figure out what was going on; one doctor's diagnosis was sciatica [a compression or irritation of one of nerve roots that give rise to the sciatic nerve] but I think his diagnosis was more like a 'guess-timate'. One time I had a really bad fever and the pain was so intense--it started early Sunday morning until late at night-- that I wound up in ER.

I was really hurting and there was blood in my urine—my doctor told me later that I may have passed a kidney stone, but I think it was a case of pancreatitis. Nobody ran any tests in the hospital; we live in a little country town and the doctors here aren't the best at diagnosing stuff. This pain was most intense right around my kidneys.

This is why I think Byetta caused this pain: as soon as I stopped taking this drug the sciatica (or whatever it was) went away—quite a coincidence. I just believe that whatever I had was linked to the Byetta.

And another thing—this drug was causing my blood sugar level to become dangerously low. When I first got diabetes I would get a warning—I would feel a little sick or tired, a weak feeling. When this happens you have to eat something fast. But the last year that I was on Byetta, I never got a warning. One time we were walking around a mall and my sugar level just plunged—I thought we would have to call an ambulance. My husband rushed to a store and got me a candy bar and I ate it before I could move. I don't know if your body builds up a tolerance but that day and a few times afterward, it was scary—not getting a warning.

More BYETTA News
It was like somebody had put a big needle in me and drained all my energy out. I just felt like passing out. About one month later, I quit taking Byetta for good—it was just making me feel worse."

Acute pancreatitis can occur suddenly, and often starts with mild to severe pain in your upper abdomen that may radiate to your back and occasionally to your chest. The pain may be nearly constant for hours or even days and is likely to become worse when you drink alcohol or eat. (Verdia doesn't drink alcohol.) According to the MayoClinic.com, bending forward or curling into a fetal position may provide temporary relief.

Verdia has signed a medical release with a lawyer (from LawyersandSettlements) and they are currently obtaining her medical records. She will then be notified as to whether or not she should go ahead with a lawsuit against the makers of Byetta.