Miley Cyrus Tour Bus Crashes, Singer Not on Board

In the second bus crash in as many days, a tour bus connected to wildly popular singer Miley Cyrus skidded off the highway this morning near Richmond, Virginia and overturned. State police reported to WTVR at the scene that Cyrus, 16, was not on board the bus at the time of the crash, but that one person had died and another had sustained minor injuries. 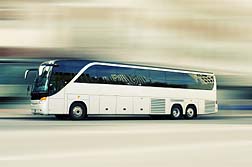 There was no official information as to the identity of the deceased person. However, a reporter with WTVR CBS 6, Wayne Covil, reports that it was the driver.

More CAR CRASH News
Tour buses generally carry both the primary singer as well as support staff for a tour, so it is likely that the 10 people on board the bus were connected to Miley Cyrus and her tour in some way. In many instances, tours have more than one bus on the road. In this case, WTVR reports that the bus that crashed was one of three or four buses involved ni the current Miley Cyrus tour. WTVR reports also that the bus contained members of the band that will be performing with Cyrus this weekend.

The accident occurred on I-85 South near mile marker 56 in Dinwiddie County, about 45 minutes south of Richmond, Virginia. Virginia State Police said the roads were wet from heavy rain Thursday night, but they are not blaming the weather for the crash.

I-85 South remained closed, with traffic re-routed on to the shoulder. The investigation is ongoing.

Virginia State Police says the bus was headed to Greensboro, North Carolina, where the singer is scheduled to perform in concert on Sunday.

If you have suffered losses in this case, please send your complaint to a lawyer who will review your possible [Car Crash Lawsuit] at no cost or obligation.
Request Legal Help Now