The newborn, which was severely burned, at Mercy Hospital in Coon Rapids, remains in critical condition. The baby's head, shoulders, part of his face, and the tops of his hands were all burned.

Maverick, who was only 12 hours old when the oxygen hood he was wearing caught fire, received burns to 18 percent of his body and is now recovering at Hennepin County Medical Center (HCMC), in Minneapolis.

As investigations into the cause of the fire continue, Allina, which owns Mercy Hospital, has hired a top health care safety consultant to investigate what caused the fire. According to the Pioneer Press (Coon Rapids / Never again, hospital vows, January 26, 2008), Mark Bruley of the ECRI Institute, a national expert on hospital-related fires, will participate in the investigation.

"We are going to do everything in our power to make sure that this doesn't happen anywhere, anyplace, ever again," Allina's chief clinical officer, Dr. Penny Wheeler, said Friday. "I can't even imagine the pain of going from one of the most joyous experiences in life to a tragedy all within the span of 12 hours." 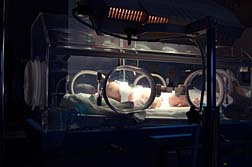 The parent's attorney, Chris Messerly, told the Saint Paul Pioneer Press, that the parents can now touch Maverick's leg, but only while wearing surgical gloves to prevent wound infections.

Chris Messerly recently represented a teenage boy who suffered a severe brain injury when the car in which he was riding collided head-on with a truck. The $10.3 million verdict allowed his parents to buy an accessible home and pay for a care provider for their son. The recovery paid back all past medical costs and provided for all future care, rehabilitation, and security.

Mr. Messerly granted me an interview, in which he answered the following questions:

You were quoted, (WCCO-TV CBS 4. Of Minneapolis, MN), as saying that Maverick was born by Caesarean section and the parents were on their way to hold him for the first time when the incident occurred. Have you ever seen or represented a case involving an oxygen hood (supplying additional oxygen) igniting?
I have not had a case before in which a baby warmer started on fire. I have seen many cases involving fire in hospitals. For example, Surgical gowns, surgery rooms, and oxygen equipment. Hospitals must be extremely careful to prevent fires.

Is this a case of defective product personal injury or Medical malpractice?
Could be one or both. The equipment first has to be tested. This includes the baby warmer, the vital-sign monitors, and oxygen mask. The testing will be done by me, the hospital, and the equipment manufacturers. We are going to get answers so it never happens again. We want to enact nation wide precautions, so it does not happen anywhere else.

According to the Associated Press, (Incubator Fire Badly Burns Minn. Newborn. Posted on ABC News on Jan 24, 2008), you said that the fire shouldn't have happened, but that the family is focused on letting their baby heal and is not yet considering legal action. Has this changed as of today (January 28, 2008)?

More News
No. Just as any parent would be focused, the family's primary focus is on the health of their baby. They know I am looking at who is accountable. Hopefully Maverick will recover. He is no longer in a medical induced coma. He is still in critical condition, incubated and has been put on a breathing tube. He is also receiving pain medication.

Does the fact that the mother had never held her son, and who is not yet allowed to touch her son, make this a more compelling case?
Yes and no. Yes it is a more compelling case as what should have been the greatest moment of the parent's life turned into their greatest horror. No in that the state of Minnesota prohibits emotional distress claims for parents. No loss of consortium claim can be filed on behalf of a parent because of injuries to a child. We are going to change this law.