Little wonder we fear fire, so—not only can it do so much damage to property, but fire can lead to burns, which can be the most painful injury to have, and can be the most expensive to treat.

Imagine the horror when a burn injury happens to a 12-hour-old child.

Tragically, that's exactly what happened to a newborn in Coon Rapids, Minnesota earlier this month, when a fire broke out in the bassinette housing the child while still in hospital. Born slightly premature at 37 weeks, the baby boy was on a warming blanket and receiving supplemental oxygen through a hood on the baby's face when the fire broke out.

A nurse noticed the flames and immediately moved the baby boy to safety, but not before the child was burned over 17 to 18 per cent of his body. 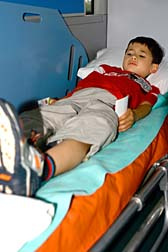 The child is expected to survive, but doctors maintain that anything above 10 per cent for such a young child is quite serious.

In the hospital environment, potential disasters are fueled by the extreme flammability of oxygen, and the presence of heat-generating instruments and other equipment. Even a static spark, is all it takes.

Burns can be the most expensive injuries to rehabilitate, sometimes running into the hundreds of thousands of dollars. Cosmetic, reconstructive surgery goes far beyond even that.

For families lucky enough to have an HMO, injuries will at least be treated. However, most HMOs will not cover the cost of cosmetic reconstructive surgery. Many a burn victim is forced to go through life with the emotional pain of horrible disfigurement, without the ability to pay for wildly expensive cosmetic surgery. Unless a surgeon is willing to donate his or her services to the cause—which sometimes happens—there is little a burn victim can do but bear their cross.

While the child from Elk River will be treated for his injuries, any future need for cosmetic surgery is a question mark.

The child was immediately evacuated to Hennepin County Medical Center's neonatal care unit in Minneapolis where the boy, named Maverick, was listed in critical condition.

The accident happened on January 22nd at Mercy Hospital in Coon Rapids. The baby boy, whose birth weight was 8 pounds, sustained mostly second-degree burns over his scalp, cheeks, shoulders and hand. Some of the burns approached the far more serious third-degree.

The baby was put into a medically induced coma to keep him calm and help the healing process, doctors said.

The child's mother, who was also transferred to HCMC for her own recovery, could only approach her newborn child while wearing a protective gown. As of two days ago, she was not allowed to hold her child. The parents, who remain unidentified and live near Elk River with a 4-year-old daughter, can now stroke one of the boy's legs, but only while wearing protective surgical gloves to prevent infection.

Doctors expect the boy will make a full recovery, although it will not be known for some time whether the child will need corrective cosmetic surgery.

Oxygen is highly flammable. While it is not known what sparked the fire, heat-producing medical instruments coming into contact with built-up concentrations of flammable oxygen have caused previous fires.

The baby was administered oxygen via a box-shaped, plastic hood that fit over his head. The fire, apparently, originated there, actually melting and blackening the hood. Two nurses that were on duty responded to the fire immediately, and rescued the baby within a few seconds of the fire breaking out.

The nurses, who were traumatized from the accident, have yet to return to work. They have been praised for their quick response.

The investigation should take three months or longer. Allina has also reported the incident to the US Food and Drug Administration, presumably as it relates to the bassinette. While the fire lasted only a few seconds, damage to the bassinette is said to have been extensive.

Mark Bruley of Pennsylvania-based ECRI Institute, a national expert on hospital-related fires, is reported to be participating in the investigation.

More News
Prior ECRI research shows many hospital fires involve heat-producing surgical tools. Enriched oxygen often is a culprit as well, because it causes fires to burn hotter and to spread more rapidly.

A November study in Pennsylvania revealed 28 surgery-related fires per year in that state alone, suggesting hundreds take place in the U.S. each year.

While this fire took place inside the oxygen hood, the larger question is what device or incident caused it to erupt, says Dr. Penny Wheeler, Allina's Chief Clinical Officer. The investigation will consider all the equipment around Maverick, such as the warmer in the bassinet, the vital-sign monitors and the sensors on the boy's body.

"We're looking at every piece of equipment that was around that baby at the time," Wheeler said.