Linda had two surgeries following an Avaulta transvaginal mesh implant for pelvic organ prolapse. The first surgery was an attempt to remove the mesh, but it was unsuccessful. Linda then opted for a hysterectomy, again to try and remove the mesh because she suffered so much pain and discomfort. 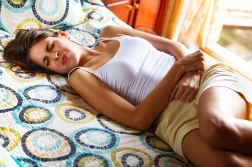 “My doctor told me that the mesh couldn’t be removed so I didn’t have much choice but to have the hysterectomy,” says Linda (not her real name). “But the mesh is still there and I ache all the time. Strangely I now have hip problems and I can’t help but think this mesh is eating away at bone??"I have no idea where it has moved to in my body.”

Linda is scheduled for an MRI and CT Scan next week to determine the extent of damage the Avaulta mesh has caused. “This surgical procedure for pelvic organ prolapse [POP] has been the most disastrous physically altering, mentally altering and family altering thing,” she says, crying. “I was so much better off before??"I could easily have lived with this problem. Now I am so sore all the time and my husband is so patient??"intercourse is virtually impossible. It is not right to have been harmed in this way.”

More BARD AVAULTA TVM News
To add insult to injury, Linda’s POP problem was never treated by the Bard mesh. Instead, she has suffered disfigurement, ongoing pain, and lack of sexual desire. “Just the thought of the soreness during sex makes me disinterested,” she adds. “And now I seem to have a bowel problem. I get terrible cramps and almost faint until it passes. I can’t walk very far because of the pressure and I even had to take a lot of time off work. Now I don’t know what is going to happen to my seniority and position at work and my pension. This Avaulta mesh is one huge mess and I am just praying that I can get some compensation.”

Another transvaginal mesh lawsuit was filed on November 30th, 2012 by Carolyn and Doyce Turner in Texas Eastern District Court (case no. 5:2012cv00120), alleging that Carolyn suffered serious injuries from her defective mesh.

In July 2012 a California jury awarded Christine Scott and her husband $5.5 million in damages because of injuries caused by Bard’s Avaulta Plus vaginal implant (case no. S-1500-CV-266034).

To date more than 300,000 women have received a transvaginal mesh implant, many of whom have filed an Avaulta lawsuit. Because of increased litigation, C.R. Bard Medical no longer sells its Avaulta mesh product.
READ ABOUT BARD AVAULTA TVM LAWSUITS