A young woman driving a rented car sustained a serious neck injury when the airbag deployed too forcefully, causing a grievous injury to the left side of the victim’s neck. It is alleged that the neck injury precipitated her death. A wrongful death lawsuit has been filed by her family. 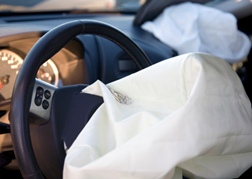 Jewel Brangman was 26 years of age when she sustained the neck injury and related head injuries following the deployment of an airbag in a 2001 Honda Civic she had been driving, following a car crash.

The failed airbag was manufactured by Takata, which supplied airbags to Honda Corporation for its vehicles. The airbags were found to be defective when moisture allowed to seep into the airbag mechanisms adversely affected the ammonium nitrate used to foster the small explosion that succeeds in rapidly inflating an airbag during the course of a vehicular collision. The ammonium nitrate is designed to burn at a fixed rate in order to produce a controlled explosion at a specified intensity in order to inflate the airbag without completely exploding the bag or surrounding components.

It was discovered, however, that the presence of moisture caused the ammonium nitrate to become unstable and - when activated within the context of a collision - was found to burn too fast, creating an explosion that succeeded not only in a too-rapid inflation of the airbag, but the accompanying destruction and fragmentation of a metal canister designed to contain the explosion.

Brangman was driving a rented vehicle and a collision triggered the airbag to deploy. Metal fragments from the canister - now blown apart - caused a neck injury as well as head injuries to the victim, from which she could not recover. Metal shrapnel caused lacerations in her neck that proved fatal.

More BACK AND NECK INJURY News
According to the wrongful death neck injury lawsuit, the 2001 Honda Civic rented by Brangman had not been repaired, according to various recall notices issued by Honda. To that end, the car was recalled for repairs in 2009; however, four recall notices sent to the owners of the rental car were allegedly ignored.

In May of this year, the Takata airbag inflator recall of 33.8 million units translated to the largest automotive recall in US history. Brangman’s father and the plaintiff in the claim, Alexander Brangman, has named Honda, Takata Corp., and Sunset Car Rental LLC of San Diego as defendants in his lawsuit, which he filed in April.

If you or a loved one have suffered losses in this case, please click the link below and your complaint will be sent to a defective products lawyer who may evaluate your Back and Neck Injury claim at no cost or obligation.
Request Legal Help Now