Donita has type 2 diabetes, and was on Avandia for over seven years. During that time, Donita suffered a heart attack and a went through triple bypass surgery. "I underwent surgery for a cyst that ruptured in my stomach, and that's when I was put on Avandia," Donita said.

" I began retaining a lot of water, and I had pain down my leg," Donna explained, "so I went to the doctor and they sent me for heart tests. They found out I had blocked arteries – five blockages. They had to do bypass surgery– three bypasses to cover the five blockages. They also discovered that I had suffered a heart attack. They couldn't tell exactly when, but within the year. I didn't know I'd had a heart attack, but my doctor showed my images of the scar tissue on my heart. 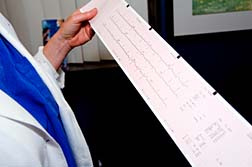 Nobody had mentioned anything to Donita about Avandia, and its association with heart failure. So Donita continued to take Avandia after her heart sugery, as neither she nor her doctor were aware of any of reports about Avandia's potential side effects. It wasn't until she saw some information on television about the potentially dangerous heart complications that she called her doctor. He said he had just heard about it himself and took her off the drug immediately. "Although I'm off Avandia now, I still have water retention and will have it the rest of my life; as well, they found a blockage behind my heart, and I had to have a stent put in," she said.

But Donita's problems aren't over. "This last year I've been in and out of the hospital six times, because of the fluid retention," she said. "They have to drain the fluid regularly. And this is definitely connected with my heart condition. My brother was on Avandia until I warned him about it. He came off it the same time I did."

Not surprisingly, all this has affected Donita's everyday life in some very dramatic ways. "I cannot live alone now. I'm also a lot more sensitive to things as a result of my heart condition. I'm monitored on a regular basis – MRIs, stress tests. But you get tired of going to the doctor all the time. I had a friend come and live with me, but now I am staying at her house, which is closer to where I work. The doctors still have"