Toyota has idled its production plants in an effort to secure sufficient parts to take care of 2.3 recalled vehicles—a number that exceeds the manufacturer's total output last year. 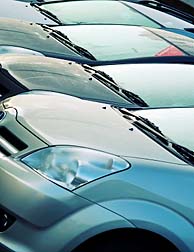 The recall even affects General Motors (GM), whose Pontiac Vibe is essentially the same car as the Toyota Matrix and was included in the massive recall announced yesterday. However, in view of GM's recent decision to halt production of Pontiac vehicles and shut down the brand altogether, the recall will not affect active GM assembly lines.

Toyota, on the other hand, has to halt production just so there are enough parts to go around.

The issue is the faulty accelerator pedal that has been in the news ever since a crash last summer caused several deaths in one family. A sticking accelerator pedal caused the late-model Toyota-made vehicle to race out of control on a busy freeway.

The accident caused many current Toyota owners to come forward with horror stories of their own. Initially, Toyota blamed the unintended acceleration on the improper installation of floor mats, even as consumers reported that they had experienced the same problem without the floor mats present. In November Toyota recalled 4.2 million Toyota and Lexus vehicles over the risk of pedal entrapment due to loose-fitting floor mats.

According to CNNMoney.com, the new recall announced yesterday is separate from the November recall. Toyota maintains that the sticking pedal syndrome, for lack of a better term, is rare and can occur when the accelerator pedal mechanism wears out. Toyota spokesperson Brian Lyons said the pedal might become harder to press when engaged and slower to return when released. In a worst-case scenario, the pedal will stick in a partially depressed position.

More DEFECTIVE AUTO News
As part of the recall effort, Toyota asked its dealers on Tuesday to temporarily suspend sales of the eight models in question. The company is also halting production at plants located in Indiana, Kentucky, Texas and Canada during the week of February 1 in an effort to "assess and co-ordinate activities," according to a statement.

Canadian production of the Corolla and Matrix will be idled at a plant in Cambridge, Ontario, while the RAV4 sport utility will shut down for a week in nearby Woodstock.

"Suspending sales and production is certainly good to reassure the public that they are serious about doing something, but too many jobs and lost sales are involved for this to be a PR stunt," said Dan Edmunds, director of vehicle testing at Edmunds.com. "They must really be concerned about this being something other than a rare condition. Hopefully this means the fix is very close to being ready, because suspension of production and sales is not tolerable for very long."

If you have suffered losses in this case, please send your complaint to a lawyer who will review your possible [TOYOTA LAWSUIT] at no cost or obligation.
Request Legal Help Now