Toyota now faces more than 320 lawsuits in both federal and state courts with regard to the problem with sudden and unanticipated acceleration. So far the National Highway Traffic Safety Administration (NHTSA) has linked no fewer than 52 deaths to acceleration problems. 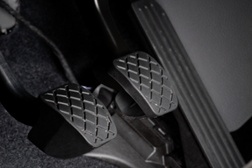 Toyota has paid a record $16.4 million fine to the NHTSA for its delay in implementing the recall over sudden acceleration.

The problem achieved national headlines in August of last year when a late-model Lexus suddenly accelerated without warning along a busy California freeway. Four people were killed—and since then, other deaths and injuries have been attributed to sudden unintended acceleration. Toyota has variously blamed ill-fitting floor mats and sticking accelerator pedals for the problem, but there are those who still suspect the car's electronic systems as a contributing factor.

According to the Associated Press (AP), lawsuits began appearing in the fall. In a report filed with US District Court Judge James Selna on April 30, attorneys acting on behalf of Toyota and various plaintiffs listed 228 federal cases and 99 related cases in state courts. A judicial panel consolidated the federal cases before Selna last month in Orange County, California.

More TOYOTA LAWSUIT News
Plaintiffs are alleging injury and death as well as breach of warranty, fraud and economic injury due to the plummeting value of their vehicles after the recalls. According to AP, a key early decision in those cases is whether to establish millions of similar Toyota owners as a single class, meaning all would be affected by a potential damages award or settlement. In the documents filed on April 30, Toyota states that drivers who haven't experienced any malfunctions should not be included in the class.

Attorneys estimate that if Toyota were to settle the cases for even a modest payout to affected motorists, it could cost the company $3 billion or more.

A total of eight million vehicles have been recalled worldwide, six million of those in the US alone. On top of car mats and sticking accelerator pedals, consumers have reported brake issues with the Prius hybrid model.

Posted by
Doris Buckhanna
on December 12, 2014
I never received information about defective acceleration pedals or floor mats from the manufacture nor the car dealership. I do know I've had several accidents in my Toyota Tacoma. I know now it wasn't all in my head. when I bought the truck, I told the car dealer, it felt like the accelerator pedal was sticking.