Our Home an Asbestos Hazard Site

Angelica Frances and her family moved to Sedalia, Missouri and bought a home. Little did they know that soon after moving in, they would be forced to leave. The entire house was contaminated with asbestos. 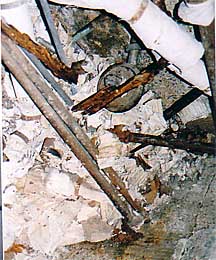 "We arrived in Missouri from California in October, 2005. We were moving here for work and family reasons and bought the property from a real estate/mortgage company that turned out to be unlicensed. Subsequently we found about 150 cases in local court records that had similarities to ours. It appears that this one company has fleeced half of this town and people in neighboring cities.

When we bought the house we were told all of the major things were newly replaced and inspected. We asked for copies of the work orders and permits and were told we would get them with our first mortgage payment.

On December 1st we paid our first mortgage payment but we didn't receive any of the documentation. Later we found out the house had not been inspected. We had the house re-inspected and they told us it should have been condemned!

When the realtor first showed my husband the house there were about five men working there. Nobody was wearing a facemask or any other protective gear, or gave us any kind of indication there were biohazards in the house. When we moved in, we found a huge mess left behind by the workers. Dry wall putty was dropped all over the floors and down the walls. Live wires were left hanging uncapped in the front room. Live wires were left in various locations in the basement. Piles of scrap materials and debris were left lying on the floor in several rooms. We had paid weekly for the hotel we were staying in so we stayed there longer than planned.

11-23-05 though 11-25-05
My son and I stacked pipes and swept the basement. My son was off school for Thanksgiving break so we were trying to get the house organized. (Later we found out we were sweeping and carrying around asbestos)

I was very ill and in my PJ's when an Insurance agent for Farmers banged on the door. He said he was there to inspect for the insurance company. I walked with him through every room of the house. He went into the basement alone. Then he told me the house was not safe.

12-13-06
Son missed school and has very bad rash. Our medical insurance isn't set up here yet so we have to find a clinic or ER.

12-15-05
I called a local company, "Home Remedies, Dennis Houk" to give me an estimate on repairs and work to be done so we can get the house repaired and insured.

12-17-05
Dennis (Home Remedies) and his wife inspected the entire house. The water heater was venting gas into the house and there was asbestos in the basement. They insisted that we needed to get out of the house as soon as possible. The amount of money and the time it would take to make the house safe and livable would be double what the house is worth.

We didn't know what asbestos was, or what it could do, we weren't even sure of where it was. I still didn't realize that it was the stuff that we had swept up and carried out.

12-19-05 evening, to 12-21-05
I had become violently ill, vomiting, headache. We had nowhere else to go. We just gotten married and moved here, paid for this house and paying for medical care, our funds were exhausted.

12-28-05
We moved into an apartment. We didn't have our furniture moved - we just had sleeping bags on the floor.

12-30-05
We rented a storage unit and moved a lot of our things to the apartment. The house was empty.

01-06-06
Bob George from Home Inspections confirmed that the stuff my son and I had swept up around the pipes was asbestos. We had been exposed to large amounts of it because we had swept it into the air, and tracked in through the house. Apparently the material used to wrap the older pipes was made up of 20% asbestos so it is very important that we seek medical attention.

I went to the medical center and they explained to me the affects of asbestos exposure. Arrangements were made for us to be examined at the Center for Occupational and Environmental Health clinic, at the University of Kansas.

01-12-06
A certified inspector is going to take samples from the house. We will have to pay $20 per sample for copies of the reports.

We have been instructed that no one is to go into the house who is not authorized. Tape has been posted around the house with hazard warnings. Our family has to get extensive medical testing done to find out how serious the situation is. We are not paying any more money for a house we can't live in and have to rent an apartment. We are not paying for two places to live.

01-17-06
Received a copy of the report from the samples taken for asbestos. Five samples were taken. All of them except one came back positive 25% to 30%, which is very high. We were told that was because it was mostly in a powdered form from age. The samples were taken from the areas we most frequent in the house, main bathroom, our son's bedroom, laundry room, basement, and enclosed porch off of our bedroom. Our bedroom was also contaminated. The enclosed porch was the only place tested that was negative.

02-01-06
Spent all day at the Center for Occupational Heath & Environmental Medicine in Kansas. We met three specialists and two environmentalists. We had pulmonary function test, blood tests, chest x-rays and examinations. We were told both my and my son's lungs were functioning way below the normal range. We were given a copy of the pulmonary test results. My son's were the worst affected. We are still waiting for the rest of the test results and reports.

02-10-06
The inspector told us the only thing to do with a contamination this bad is to tear the house down and you can't rebuild on the same site. We have to get rid of everything we had in the house, especially all of our clothes. As long as we keep using them we keep re-exposing ourselves.

More News
We received a letter from the Department of Natural Resources. It stated that the Air Pollution Control Program notified both the Occupational Safe and Health Administration and the consumer Protection Division of the Missouri Attorney General's Office. Another inspector came out to the house and took more samples to get a better idea of how much of were exposed to.

03-14 -06
Received copies of samples taken on the kitchen shelves. They tested positive for asbestos.

04-21-06
We drive by the house at least ever other day to make sure it is not tampered with. We are still responsible for it.

So far all of this mess has cost us at least $25,000. We are going public about his situation. This is not going to get swept under the rug and we are not going to be quiet about it any more. We tried to look for a peaceful solution but now we are going to fight back by any legal means necessary."

If you or a loved one has been affected or injured by exposure to asbestos, and would like a free case evaluation, please fill out this [asbestos/mesothelioma] complaint form.
Request Legal Help Now