The Asbestos Disease Awareness Organization (ADAO) has launched a powerful online video with detailed footage of asbestos dust and environmental hazards within the Capitol Hill tunnels where government crews are working. 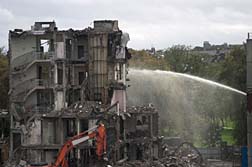 "For more than 20 years, maintenance workers who have been exposed to asbestos and other occupational hazards while maintaining the underground utility tunnels beneath the U.S. Capitol complex. Nine of the ten current tunnel workers have asthma requiring treatment, and seven have asbestosis. All have elevated risks of lung cancer, colon cancer and mesothelioma -- an incurable cancer.

According to the ADAO, the asbestos in the tunnels may also pose a threat to the health and safety of the individuals who work and visit Capitol Hill. Many Capitol Hill police refuse to patrol the tunnels because of exposure concerns.

Harsh Working Conditions
The new video features John Thayer, Supervisor of the Capitol Power Plant Tunnel Crew for the Architect of the U.S. Capitol, which is the employer of the crew. Thayer is a leading advocate for tunnel worker safety.

Thayer's crew maintains the five miles of underground utility tunnels that supply heat and cooling to all of Congress and more than 20 other federal buildings on Capitol Hill. Temperatures in the tunnels can reach 160 degrees and tunnel workers may be exposed to welding fumes as well as pulverized asbestos and concrete dust.

Thayer is deeply concerned for his crew: "We know from personal experience the lethal danger that asbestos presents because we have worked in and breathed asbestos for decades, and are now beginning to suffer the health consequences. The Architect of the Capitol knew, but didn't tell us, that the concentration of airborne asbestos in the tunnels was extremely toxic -- 30 to 40 times the legal limit.

"We need to make sure that people know the truth."

A Government Cover-Up?
According to a recent ADAO's memo to the President, the Architect of the Capitol had conducted its own research a decade ago, concluding that regular air quality monitoring and protective equipment were necessary for workers due to airborne asbestos. Yet its own recommendations were not implemented until 2006, when it began requiring respirators in the tunnels.

This requirement came after the U.S. Office of Compliance filed an enforcement action and tunnel workers had testified about tunnel conditions before Congress and the media.

Health and safety advocates are calling upon the government to compensate the tunnel workers for illness and injury, and to ensure lifetime medical monitoring for the workers and their families. The ADAO charges that whistle-blowing workers have been harassed by their employer.

"It is amazing that any employer tries to get away with an asbestos cover up these days," says Linda Reinstein, Executive Director of the ADAO.

A National Problem
Many health problems are occurring due to the deterioration of the tunnels. As slabs of concrete fall to the ground, they turn into pulverized asbestos and cement dust. Asbestos fibers are then released into the air, much like they are when a building is demolished.

More News
For years, congressional representatives have unsuccessfully introduced legislation to ban the manufacture, processing and distribution of products containing asbestos. Ironically, as Congress continues to defeat this legislation, workers are suffering just beneath the halls of government.

Life-Threatening Risks
Studies estimate that during the next decade, 100,000 victims in the United States will die of an asbestos-related disease -- equaling 30 deaths per day.

If you have been exposed to asbestos, it is important to see your physician and get a medical assessment immediately, and to speak with a lawyer to find out your legal options.

If you or a loved one is suffering from lung cancer, asbestosis, mesothelioma or other asbestos-related diseases caused by exposure to asbestos or asbestos containing products, please contact a [Asbestos and Mesothelioma Lawyer] who will review your case at no cost or obligation.
Request Legal Help Now