"I lost my father to Mesothelioma," says Charles Perea," and I don't want my children exposed to the same possible fate." For that reason, Perea founded the Johnny O. Perea Foundation, named after his father, to help his community learn and deal with the hazards of asbestos. 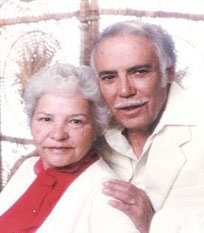 "We tend to believe asbestos is a thing of the past, but it's all around us," Perea explains. "There are over 3,000 products manufactured in the US that contain asbestos, and we've had 30 years of regulations in place because asbestos is so dangerous. Schools have their own standards but homes are not regulated and they contain the same materials as schools, such as sheet rock; ceiling textures such as popcorn ceilings; ceiling compound; joint compounds; and flooring materials such as linoleum.

The worst thing is that people doing renovations are ripping this stuff out. To this day, some people don't have a clue. My father didn't know the danger of asbestos either, he was never informed.

My father was a carpenter by trade and he did lots of home renos and construction, many of them involving acoustical ceilings with asbestos. He retired at 65 after receiving his 50-year carpenters' membership pin (that I proudly wear) and he died four years later, in 2001. It was devastating; my dad's retirement years were spent suffering as a result of his exposure to asbestos.

Around 1980, he was diagnosed with asbestosis, but around the time he retired, they found mesothelioma. It was horrible. I remember him going to the doctor twice a week to have fluid extracted from the pleural sacs surrounding his lungs. It provided some level of relief, it helped him breathe easier—for a while. He died in agony.

You just have to see that pain one time and it will stay with you a lifetime. We couldn't do anything for him.

My dad was involved in a class action lawsuit but he received very little compensation because the asbestos manufacturers' defense was very effective. They pointed the finger at each other so there was no way to prove that one particular product caused his illness. We see little trickles of money coming in but they are from companies that are bankrupt. Apparently, most of these companies filed bankruptcy under chapter 13 to reorganize but a lot of them are still in business—they don't have to settle their claims until way down the road.

It is humiliating—I remember my mom receiving a check for $7. She cried for a whole day. We haven't seen any money for several years although it is possible, according to our attorneys, that some monies may come from the companies as they come out of bankruptcy. Thank God the medical bills were covered.

After my father died, I started to question what kind of involvement I had with those materials as a young man. I often worked with my dad, cutting and handing him materials as he stood on a scaffold. And we did our laundry together—five siblings and my father's clothes all mixed in. I became concerned that I too might have been exposed to asbestos.

Then I asked myself a question: how many homes that we live in are also made of the same materials my father used?

So that is why I started the foundation. Now I talk to hundreds of people at health fairs, trade shows, and of course, countless phone calls. Home owners have a right and a need to know that future generations are still at risk.

If you know these materials are present in your home, you can avoid contact and avoid getting sick. But you have to know—that is why I recommend ongoing education. People don't know their walls contain asbestos, that popcorn ceilings are bad. I am taking a proactive, preventive approach.

More News
So much money is being spent on cancer research and treatment—if we can spend a portion of that up front, many cancers could be prevented. It is about prevention vs. treatment—we could avoid huge costs and suffering down the road.

The foundation has a ' three-prong' approach: education, then assessment (we offer a free service to go into people's homes and collect samples) and thirdly, we want to be able to come up with a plan on how to deal with asbestos—we haven't got the funding yet. The worst thing to do is remove asbestos. But we can work around it and safely manage it.

I did a lot of research on asbestos and mesothelioma and found out that there are a lot of deaths to come, there is no end to it. As long as asbestos is out there we will continue to see people getting sick."

If you have believe you have suffered losses from exposure to Asbestos, please contact a lawyer involved in a possible [Asbestos Lawsuit] to review your case at no cost or obligation.
Request Legal Help Now