What is a Lifetime's Exposure to Asbestos Worth?

As an electrician at General Motors, Russell had plenty of contact with asbestos. In fact he had 20 years exposure to the lethal substance. Today, he has a spot on his lung, and needs an inhaler to help him climb stairs. He wonders if his prolonged exposure to asbestos in the workplace may have set in motion an irreversible disease, called asbestosis.

"I started working for General Motors in 1969," Russell said."I worked there for 39 years. The first 13 years I was there I worked in the foundry. The foundry was covered in asbestos---in the walls and ceilings. They used it to line the inside of the furnaces; they had asbestos in big rolls, and they used asbestos bricks in the furnaces. When I left the foundry and went over to the main site, into an engineering building (which was an office building), asbestos was in the ceilings there. We had to climb in the ceilings to pull wires and run pipe. I worked in the main site until I retired." 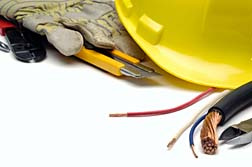 Russell is just one of hundreds of people who would have been unknowingly exposed to asbestos at the plant. But it was likely even worse for the old timers. "The older pipefitters used to say that they would fix the asbestos insulation up with water in order to put it on the pipes, and they would apply it with their hands," Russell said. "There was a lot of asbestos around then. Until they found out it was bad for you, then they started cleaning up the site. The asbestos was taken out of the offices, but it was too late. I worked in that area for five or six years before they came in and removed the asbestos. That was probably around 1985, 1986."

While people may have contracted asbestosis from exposure, in all likelihood, nobody would have said anything about it anyway "You couldn't really do anything against GM until after you retired," Russell said. He retired a year and a half ago, in 2007.

"It was about two years before I retired that I started having breathing problems," he said. "I noticed that I was having trouble getting up the stairs. Every few steps I would have to stop and catch my breath. I'm not a smoker, I've never smoked.

General Motors used to give us breathalyser tests every so often. The first time I took it I didn't pass it properly. But I don't know what that means – it was never explained to me. I took the test from my family doctor, and the same result, but he didn't do anything about it. Then, in 2006, about a year before I retired I did the test again at GM and the results were the same. There was one area I didn't pass. Still, nobody told me what that meant. I even took a pulmonary test at the local hospital, with the same results. I have to go back to my doctor in October, and believe me I am going to push for some answers then. I want to find out just what the problem is and what kind of affect it's having, and if there are any long-term health implications."

More ASBESTOS News
In addition to the mystifying pulmonary tests, Russell has also had chest x-rays done. "GM also provides routine chest x-rays for its employees, but I've never seen mine," he said. "They told me for many years that I have a spot on my lungs, but nobody knows where that comes from. It's been there ever since they started taking x-rays, which was a few years after I started work there."

Right now, Russell uses an inhaler to help him get up the stairs. "If I'm working outside or doing anything strenuous I have to take a couple of puffs on it," he said. " I can mow the lawn, as long as I don't overdo it. But if I climb stairs it's a problem." But what happens in a few years if things get worse? Russell is only 67 years old. He needs some answers, and believes a lawyer can help.

Posted by
KEN MCCLELAND
on July 28, 2019
I think it sucks that while the asbestos manufacturers were sued and forced to put a huge pile of money aside for mesothelioma victims, that the sick individual will never see. Of course their lawyers and family members will benefit, but not the poor slob who's been given a death sentence and will struggle for the rest of his life.

But what about the guys and girls who've been exposed to asbestos and have not yet fully developed the diseases from their exposure, not all of which will be mesothelioma? You see, it wasn't the manufacturer who exposed me to asbestos, so how or why would I blame them for making a product that was legal to make? My employers however, I can't help but blame them, because they deliberately exposes me to asbestos even after word was out that exposure to it may be hazardous to ones' health. They didn't offer any warnings to, no training, not even any Personal Protective Equipment... nothing but 'here, mix this powder with water and insulate that boiler with it.'

So when are the lawyers going to go after employers and contractors who intentionally used their employees to make a few bucks at the employees expense, thereby shortening thier life expectancies and quality of life? Surely they can't believe that employers were unaware of the hazards long before the government forced them to offer training. Especially the employers in the trades unions, such as the pipefitters and boilermakers, and the trades unions that provided their work force.