Faculty and staff at California State University were shocked when an article in the university newspaper revealed that asbestos has been detected in 21 of the campus's buildings.

Risks associated with asbestos exposure include asthma, asbestosis, elevated risks of lung cancer, colon cancer and mesothelioma -- an incurable cancer of the lining of the lungs or abdominal cavity. Once a diagnosis of advanced mesothelioma is made, the average life expectancy is 4 to 14 months. 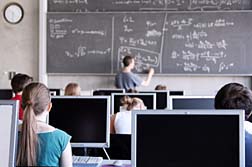 The Daily Sundial published data from a study by Environmental Health and Services, which stated that the hazardous material can be found in tile floors, thermal pipe insulators, or other forms of pipes.

Contaminated Areas Raise Concerns
Among the contaminated areas listed are the Child & Family Studies Lab School; the Chicano Cultural Center; and the Asian American Studies Department. While all 21 buildings should post notification of the asbestos presence at their main entrances, many of the buildings have no notification posted.

Students, faculty and staff are concerned, as are parents and local health advocates. As the university breaks for the summer, some students may be wondering if they should return in the fall.

"It's unsettling knowing about the asbestos," said a CSUN staff member who wished to remain anonymous. "We are curious as to when and if it's going to be fixed."

Need for Monitoring
The university's Environmental Health and Safety Department has identified the areas containing asbestos but state that the asbestos "in its present state" causes no health risk.

However, were it to become damaged, the risks could be great. "As long as no one breaks the asbestos-containing material, it will not necessarily expose it (asbestos)," said the university's Environmental Compliance Manager Anthony Pepe.

The Daily Sundial reports, however, that the university has no routine monitoring system in place to determine whether or not the asbestos remains in its current, stable condition.

Earthquake Risk
Because the area is prone to earthquakes, there is a heightened need to ensure that all of the buildings are checked regularly, to ensure that no asbestos has been released.
When a major 1994 earthquake damaged many of campus's buildings, much of the university's asbestos was removed. The 21 buildings are among those that were not impacted by the quake.

Legislation Needed
Believe it or not, while the dangers of asbestos have been common knowledge for more than 30 years, Congress has still not passed legislation to ban the manufacture, processing and distribution of products containing asbestos in the U.S.

More News
Sen. Patty Murray (Dem. - WA) introduced a bill in 2002 calling for a ban and increased research to find a cure for mesothelioma.

Five years later, Congress has yet to enact the bill.

Were You Exposed to Asbestos?
More than 27 million workers were exposed to asbestos between 1940 and 1980, and the risk still remains high for many workers.

Approximately 1.3 million construction workers still face significant exposure to asbestos. Employees working in textiles, friction products, insulation, and other building materials may also be exposed, as are those who working on automotive brake and clutch repairs.

If you have been exposed to asbestos, it is important to see your physician and get a medical assessment immediately, and to speak with a lawyer to find out your legal options.

If you or a loved one is suffering from lung cancer, asbestosis, mesothelioma or other asbestos-related diseases caused by exposure to asbestos or asbestos containing products, please contact a [Asbestos and Mesothelioma] lawyer who will evaluate your claim at no charge.
Request Legal Help Now