No workers were injured nor oil spilled when an exploratory well being used by a new company at Alaska's North Slope had an apparent blow-out involving drilling mud on February 15, The Associated Press reported. 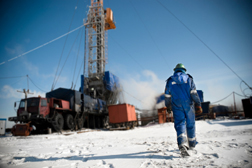 According to the news outlet, the well was located near the mouth of the Colville River, and it was at this site that a natural gas patch was hit about 2,600 feet deep, forcing drilling mud back up the rig, according to a statement by Alaska Department of Environmental Conservation spokesman Ty Keltner.

Roughly 42,000 gallons of drilling mud were released on the gravel pad and snow-covered tundra, according to the statement.

Drilling mud and methane gas shot through a diverter pipe from the well, and attempts to fix the problem by pumping additional mud into the borehole in an effort to "kill" the well failed, as that mud was also blown out.

The AP reported that Spanish oil company Repsol evacuated workers from the site over concerns about the methane gas, and by the morning of February 15, the company noted that the the flow of gas had nearly ceased.

According to the news outlet, the company also reported that the drilling mud was no longer flowing from the well, but it was not completely under control. Repsol hired Wild Well Control Inc. to assist in the process of controlling the well.

More ASBESTOS DRILLING MUD News
The news outlet reported that once the mud is put under control, a company will be hired to come in and begin the cleanup process and try to remove the mud. Along with the cleaning firm, a state and North Slope Borough official were expected to be onsite to help with the inspection.

Drilling mud, or drilling fluid, is a term for the liquids that are used in drilling that lubricate the drill shaft and help to cool the hole, according to the AP. Drilling mud has become a growing concern for oil industry workers--particularly mud engineers--since several cases of asbestos mesothelioma have been linked to drilling mud asbestos exposure. Asbestos had long been an additive to drilling mud, in both onshore and offshore drilling.

Repsol, on the same day of the drilling mud issue in Alaska, was awarded a $3 billion concession to develop a series of gas fields in Algeria, according to Reuters.