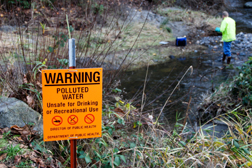 "It goes straight to our water intake and it's fracking fluids in 55 gallon drums," Rorie told the news source. "We don't know how much of it has leaked out."

Rorie added that fishermen originally discovered the hazardous chemicals and emergency crews then stepped in to remove them from the creek.

"What is on the barrels or what the labels that we're seeing indicate are surfactants and lubricants and those are commonly used in the drilling operation," added Cecillea Pond-Mayo, a spokeswoman for the Arkansas Department of Environmental Quality. "We are going to be taking samples of the water and testing specifically for those contents."

Rorie, who claims that drilling companies have practiced such chemical waste dumping for a number of years, said that the labels on the barrels could help the city find out where they came from.

According to the news source, the Arkansas Department of Health will test to see if Clinton's drinking water has been adversely affected.

More ASBESTOS DRILLING MUD News
Hazardous materials such as asbestos have also been found in drilling mud, as the recent $322 million award to a Mississippi man involved such materials.

The Associated Press reports that Thomas C. Brown claimed he inhaled asbestos while he mixed drilling mud that had been manufactured and sold by Union Carbide Corp. and Chevron Phillips Chemical Co.

The jury in the trial reportedly awarded $300 million in punitive damages to Brown as well as $22 million in actual damages. The 48-year-old Brown reportedly suffers from asbestosis as a result of being exposed to the carcinogen, the news source said.

"Although the asbestos was known to cause cancer and lung disease, CP Chem and Union Carbide continued to market these almost 100-percent-pure asbestos products long after they knew the dangers," Brown's attorney explained during the trial.