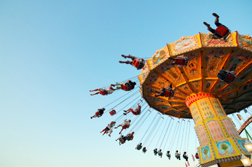 Imagine the plight of one California family after four of their children suffered injuries while on the so-called "Yo-Yo" ride at a California county fair in 2008. The Yo-Yo is a popular ride manufactured by Chance Rides Manufacturing (Chance) that twirls riders in swing-like seats suspended from chains on arms attached to a large hydraulic cylinder.

According to the December 21 edition of the Wichita Eagle, witnesses counted 23 children on the ride when something snapped during the evening of May 16, and the chairs, along with their passengers, crashed to the ground. The Yo-Yo was observed to have made one and one-half revolutions, all the while dragging riders along the ground, before the ride finally stopped. Some children became entangled in the chains and rails.

Among the injured were the four Milligan children of Angels Camp, California. Their 14-year-old daughter was the most severely injured, suffering head trauma that doctors say is responsible for severe learning disabilities.

Amusement park injury lawyers discovered that a similar accident occurred at Six Flags Over Texas in 2006. It was determined (in both accidents) that a lock washer failed, allowing two lock nuts to loosen.

The Consumer Products Safety Commission (CPSC) recalled 85 Yo-Yo rides following the Angels Camp accident for inspection and repair. However, attorneys noted that the manufacturer knew about the deficiency two years prior following the Texas accident. Chance issued a service bulletin to operators of the ride detailing the cause of the accident and instructions for repair. Court records would show that four days after issuing the first service bulletin, Chance issued a follow-up memorandum that made no mention of the safeguards.

In a theme-park accident settlement, Chance, based in Wichita, agreed to pay $500,000 of a total $3.3 million settlement. The lion's share of the liability went to the owner and operator of the ride, Midway of Fun. The ride had been purchased from North American Amusements two years before.

More AMUSEMENT PARK ACCIDENT News
It should be noted that Chance required the owners of the ride to return the main hydraulic cylinder to the factory for servicing every five years. However, records indicated the ride had not been serviced since 1997. It was also found that the ride's hydraulics had been leaking and there were improper electrical connections, but the ride continued to operate.

For the Milligan family, the horrific theme park accident proved a hardship. The family has struggled with medical bills, and the legal firm representing them in a lawsuit helped pay the family mortgage to keep them from losing their home. It will be easier now with $3.3 million in the bank. It was not reported if there were additional lawsuits stemming from the other children injured. It is also not known if the defendants will appeal the verdict.