When one thinks of an amusement park accident, one tends to focus on roller coasters, Ferris wheels or other rides commonly found in theme parks. Zip lines don't immediately come to mind. But zip lines are out there and increasing in popularity. And while there have been few mishaps, there have been injuries—injuries that are bound to increase as zip line installations increase over time. 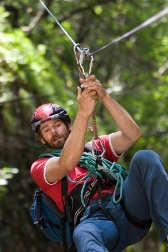 It is not known if Devonda Byrd ever filed an amusement park lawsuit over her spinal cord injury. Nonetheless, the resident of Goodlettsville has been left immobilized and depending on a scooter to get around after a zip line accident in Mexico four years ago.

According to the report, Byrd and her husband were vacationing in Mexico when Devonda's partner decided to try a zip line. As Devonda stood atop the platform in an attempt to snap a picture of her adventuresome husband, the man careened into her.

"[The zip line attendants] were supposed to stop him," Byrd told the Tennessean. "But with him being 300 pounds, they just couldn't." While not the most horrific theme park accident, the collision nonetheless sent Devonda careening off the platform and falling 25 feet to the ground. Four years later she can only take steps with the aid of a walker, and relies on a scooter the rest of the time.

"I think they should do away with [zip lines] period," Devonda Byrd said of her amusement park accident. "It’s just too dangerous. I was just an innocent bystander."

The Tennessean reports that currently in Tennessee zip line operators are expected to follow industry standards and hire third-party inspectors. It has been reported that many operators voluntary adhere to standards set forth by the Association for Challenge Course Technology (ACCT). However, state regulations such as those adopted by the state of Arkansas are so far the exception, rather than the rule. In Arkansas, zip lines are inspected twice each year; operators must carry sufficient liability insurance and notify the state prior to opening.

Arkansas requires notice of amusement park accidents and requires a zip line to be shut down at the point when a mishap occurs.

The Tennessean reports that the state of Tennessee is prepared to bring in regulations this fall.

More AMUSEMENT PARK ACCIDENT News
None too soon, say safety advocates, noting the nationwide trend that has seen a 50 percent growth in the zip line industry in the last year alone. The ACCT notes there were 320 sites in the US and Canada with zip lines in 2011.

A zip line installation located at Honeysuckle Hill Farm in Springfield reportedly remains closed following an injury to a zip line rider. A woman riding the zip line was halted midway through and became marooned out on the line. When efforts by zip line staff to pull the woman into the platform failed, an attempt was made to lower the woman to the ground.

"In that process a mistake was made," said Jeff Alsup, the owner. "We dropped her. It was human error; it was our fault."

The woman fell about 25 feet to the ground. The extent of the woman's injuries are not known, or if she is contemplating a call to an amusement parks injury lawyer. The incident happened last month.

Posted by
Jason Binnes
on August 26, 2012
The 1st cited accident was due to human stupidity and the slovenliness so typical in Mexico. Other cited accidents were also due to negligence and incompetence. A properly-installed and run zipline is about as safe as any thrill ride can possibly be.
Posted by
Ilene Callaway
on August 23, 2012
I am so pleased to read this article. I have been trying to spread the word of the need for safer zip Line regulations since my 36 year old son fell 200 feet to his death. A Zip Line tower collapsed causing the line he was testing to fall. It was discovered the the soil was faulty and the anchors were not placed far enough in the soil. The zip line was located in Hilo, Hawaii. As I have made it a point to keep track of Zip Line news I have discovered many different errors in regards to the safety of this industry. I commend Arkansas for their concern for safety. I have also from my investigation of this industry realized just how popular this sport is becoming and encourage stricter regulations. It is my hope there will be more articles such as this written and the general public will become aware that not all Zip Lines are safe.