An amusement park accident in New Jersey has resulted in five people being taken to hospital. The theme park accident occurred in late July, on a water ride. No one was seriously hurt in the incident, unlike the roller coaster accident in Canada, in which one man—a theme park worker—was killed. 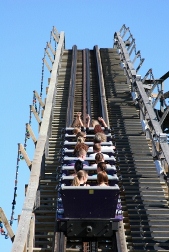 According to The Record (7/25/12), five people suffered scrapes and bruises and were transported to hospital after an accident on a water ride at Mountain Creek amusement park. The accident occurred when a series of inner tubes collided and became stuck in a tunnel. The ride was shut down so officials could conduct an inspection. Riders were not seriously injured but were reportedly somewhat frightened by the incident.

More AMUSEMENT PARK ACCIDENT News
Meanwhile, an investigation has begun into the roller coaster accident that took the life of a theme park employee in Montreal, Canada. The 35-year-old reportedly died after being struck by a roller coaster. According to The Gazette (7/6/12), the employee was in a locked, restricted zone when he was hit and did not notify the ride operator of his whereabouts. The company that operates the theme park issued a statement that the ride was operated correctly and was safe when the accident occurred.

An official report on the accident could take months.

Most injuries in amusement parks are not serious. In fact, most injuries are minor cuts and bruises. But those that are serious can have life-long implications for amusement park guests. Injuries such as traumatic brain injuries, head and neck injuries, spinal injuries and internal injuries can happen as a result of amusement park accidents. In situations where park guests are injured on a ride or while at the park, a variety of parties could be liable for the guest's injuries. These include the park owner, operator, ride designer, ride manufacturer and the people responsible for maintenance of the ride.