The approaching Memorial Day holiday represents the first long weekend of the 'après summer'—a month before the official start of summer, but with the warmer weather reminiscent of the season to come. For countless families, a trip to the amusement park is on the agenda. But for many, headlines trumpeting Amusement Park Accident is a tragic reality. 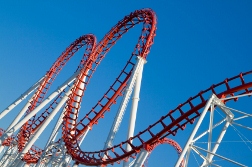 To that end, an amusement park lawsuit stemming from an event last summer continues to evolve, with the filing of a third lawsuit against the operators of 'Riptide,' a rollercoaster at the Salem Fair that was involved in an accident in 2011. According to The Roanoke Times (4/11/12), Samantha Goad was 16 when she was seriously injured in a "severe and violent crash" of the rollercoaster, as stated in the $1 million action.

According to the report, six riders were injured the night of July 3, 2011 when the roller coaster car in which they were riding stalled at the very top of the ride, then was struck from behind by another set of oncoming cars.

The extent of Goad's injuries was not disclosed in the report. The amusement park lawsuit was brought on behalf of Goad by her mother, and filed in US District Court in Roanoke.

A defendant in all three lawsuits is Deggeller Attractions, which according to The Times is under contract with Salem to provide most of the rides available at the Salem Fair. Deggeller has blamed the accident on a baseball cap, which became dislodged from the head of one of the other riders and was caught up in the wheels of the car in which the wearer, his fiancé and Goad were riding, causing the car to stop.

An oncoming roller coaster car some distance behind was unable to stop and slammed into the stalled car at between 5 and 12 mph.

The three lawsuits, filed with the help of an amusement parks injury lawyer, were brought separately by Goad, George Roseberry (who was wearing the hat) and his fiancée Brittney Simms.

The defendant, which claims to have spent $10,000 to repair the compromised ride, filed a countersuit against Roseberry, claiming that it was his hat which caused the accident and alleging that Roseberry ignored requests by ride operators not to wear his hat on the roller coaster.

However, according to The Times all three plaintiff lawsuits feature the same allegation: that a ride operator ignored the stalled car. In spite of warning shouts from the distressed riders up above, a ride attendant—allegedly having looked up and seen the stalled car—"ignored the warning and, nevertheless, proceeded to release a second car," the amusement park lawsuits claim.

More AMUSEMENT PARK ACCIDENT News
Theme park accidents can harm both attendees and employees alike, especially during the performing of maintenance on an attraction. On May 15th a worker at SeaWorld San Diego was injured while working on the Wild Arctic flight-simulator ride. According to The San Diego Union-Tribune (5/16/12), the maintenance worker was checking a leaking hydraulic plug when it suddenly popped off, and the employee suffered facial lacerations from the escaping fluid.

Amusement park accident statistics suggest the potential for an uptick in accidents during a long weekend, when a surge of participants head to the theme park for some long weekend fun. The Memorial Day holiday is especially popular for families who may not be aware that their trip to a favorite facility could be a theme park accident waiting to happen.