A woman has been awarded $1.5 million in her amusement park lawsuit, in which she alleged she was not warned about the risks of riding a roller coaster with a neck injury. The plaintiff, Paula Noone, allegedly suffered her theme park injury while on a Coney Island roller coaster in 2008. 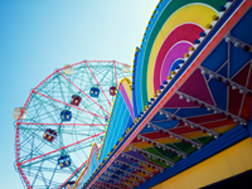 The lawsuit alleges that Noone’s herniated discs and concussion were caused by inadequate restraints and excessive acceleration, which resulted in her head and neck being violently flung back and forth. Her lawsuit was filed against Astroland Kiddie Park and Cyclone Coasters.

Although Noone was awarded $1.5 million, the jury found her 60 percent responsible for her injuries, making the amount paid out approximately $600,000. The New York Post (3/30/15) reports that Noone intends to file an appeal to obtain the full $1.5 million.

Meanwhile, a lawsuit has been filed against a waterpark resort, alleging a teenage boy was injured on a ride that was not safe. The lawsuit was filed by the family of the boy, who was injured in 2012 while riding an indoor water ride known as “Sahara Sidewinders,” according to WTAQ (3/27/15). The plaintiffs allege that the business knew the ride was unsafe and posed an unreasonable risk of injury, and had received reports of prior incidents on the slide but did nothing to mitigate those risks.

More AMUSEMENT PARK ACCIDENT News
The lawsuit was filed against Kalahari Resorts and alleges that the teen suffered personal injury, pain and loss of enjoyment of life. The plaintiffs seek damages.

A lawsuit has also been filed against Knott’s Berry Farm, claiming a young girl was injured on the Timber Mountain Log Ride. The lawsuit alleges Kristine Laborte, who was six years old when she rode the Timber Mountain, lost consciousness and suffered vision problems when her face hit the back of the seat in front of her as the car she was in stopped suddenly at the bottom of a drop.

According to the Los Angeles Times (5/11/15), the lawsuit claims Knott’s Berry Farm knew about nine incidents in which children were injured on the same ride but did not take proper measures to address all issues with Timber Mountain.
READ ABOUT AMUSEMENT PARK ACCIDENT LAWSUITS