A lawsuit has been filed against Six Flags following a roller coaster accident that resulted in head injuries to two riders. The amusement park accident, which happened on July 7, occurred when a train on the roller coaster partially derailed. 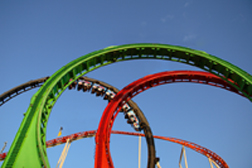 The accident involved the roller coaster Ninja, and occurred when a tree branch fell on the roller coaster’s track, hitting the front of the first car and causing the train to partially derail. According to NBC Los Angeles (7/8/14), 22 riders were left suspended above the ground for more than two hours and four people were treated for injuries.

Lawsuits were filed by Jeremy Ead and Olivia Feldmen, who say they suffered head injuries in the accident. The plaintiffs seek reimbursement for their medical expenses, loss of earnings and emotional distress. NBC Los Angeles (7/10/14) quotes their lawyer arguing that the roller coaster should not have been built in and around the trees.

Ead gave a statement to the Los Angeles Times (7/8/14) shortly after the accident in which he noted that a branch hit him in his head, resulting in bleeding. Witnesses told the paper that they heard loud cracks, which were followed by screaming.

Following the accident, Six Flags released a statement that the safety of its guests and employees was the highest priority. An investigation into the crash has been undertaken by the California Department of Industrial Relations.

Meanwhile, the lawsuit regarding Rosa Esparza’s death continues. Esparza died in 2013 when she fell from the Texas Giant roller coaster while at Six Flags Over Texas. The lawsuit was filed in September 2013, and according to the Fort Worth Star-Telegram (7/12/14), the sides attempted to mediate a settlement but mediation attempts were unsuccessful. Six Flags has placed the blame on the company that designed the cars, Gerstlauer Amusement Rides, while that company has placed the blame with Six Flags.

More AMUSEMENT PARK ACCIDENT News
A reported point of contention is that according to reports, since 2011, Six Flags had in its possession a coaster seat that could be placed at the entrance to the ride to determine if guests could safely fit in the cars, but did not use it until after Esparza’s death. Lawyers say that if the seat had been in use, the accident would have been avoided.

Following the accident, Six Flags upgraded the ride to include new restraint-bar pads and seatbelts.

Lawyers for Gerstlauer also allege that Esparza was not properly secured in her seat by ride operators and that operators did not stop the ride despite concerns that the restraint bar was not properly locked in place. Six Flags, however, alleges the ride was defective and that it followed Gerstlauer’s guidelines for operating and maintaining the ride.