A young girl who lived through a devastating amusement park accident almost two years ago is recovering and is now able to walk on her own. The girl, who was 12 years old when she suffered a fractured spine and pelvis in the horrific theme park accident in 2010, fell 100 feet to the ground after a miscommunication on a ride at an amusement park. Doctors were not sure if she would recover from her theme park injuries. 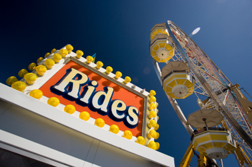 Teagan Marti suffered fractures to her spine and pelvis after an accident on Terminal Velocity at Extreme World in Wisconsin Dells. The accident reportedly occurred when a ride worker dropped Marti too soon from the ride, before the cage she was in was at the top, and before the safety net was properly in position. The ride worker involved, Charles Carnell, was convicted of second-degree reckless injury and ordered to pay $268 in court fees following the accident.

Carnell pleaded no contest to the charges against him. He reportedly told officials that he blanked out before releasing Marti from the cage and had not received the all-clear signal from a coworker who operated the net.

The Terminal Velocity ride involves lifting riders approximately 165 feet up a tower. Once at the top, they are lowered through a trap door and suspended in a harness until the operator pulls a cord, allowing them to free fall 100 feet into a safety net, which sits over airbags. Marti was dropped from the tower while the airbags below were being inflated and before the safety net was in place.

More AMUSEMENT PARK ACCIDENT News
As a result of being released from the cage, Marti fell approximately 100 feet to the ground, landing on her back. She suffered a broken spine and pelvis and sustained lacerations to her organs. Following the accident, Teagan was treated at American Family Children's Hospital, where she was kept for a month after the amusement park accident.

It was at the same hospital that Marti walked into in February, with the aid of a walker, astonishing many who thought she might not walk again. According to The Miami Herald (2/20/12), when Marti left American Family Children's Hospital, she was a quadriplegic. She returned to the hospital in support of an expansion at the facility to provide new cardiac care beds, CBS News (2/20/12) reports.

Marti's family filed a lawsuit against the owners of Extreme World. That lawsuit was settled in October 2012 for an undisclosed amount.