Here we present a tale of two Theme Park Accidents: one seemingly akin to an everyday occurrence that could result from an unthinking theme park worker, the other rather bizarre. Both resulted in tragic consequences for the individuals involved. 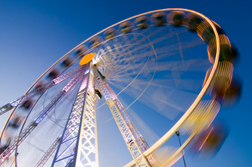 And both have resulted in an Amusement Park lawsuit.

In the first incident, a woman visiting Disney World with her family in 2012 was attempting to board the Jungle Cruise attraction at Disney’s Magic Kingdom in Orlando when she fractured a bone in her left leg. The accident could have been worse, given that Katherine Jo-Ann Baliton was carrying her three-year-old son in her arms at the time she was attempting to board the attraction and sustained the amusement park injury.

According to the Orlando Sentinel (12/6/13), Baliton underwent surgery on her leg injury on April 4, a couple of weeks following the March 23rd mishap. Tragically, Baliton developed a blood clot in her leg and died three days later, on April 7, 2012. Baliton’s family has filed an amusement park lawsuit against Disney World, alleging that Baliton’s injury could have been prevented and her death averted had park staff made an attempt to assist the young mother and her son onto the attraction.

The Baliton family, in their lawsuit, seeks repayment of medical and funeral expenses, lost financial earnings and compensation for the pain and suffering experienced by Baliton’s surviving husband.

One might assume a horrific theme park accident to constitute a fall from a whirling ride or a roller coaster accident. However, an accident that occurred at the Wild West City theme park in New Jersey in 2006 certainly went beyond the bounds of the typical theme park accident. And while most theme park injuries happen to patrons, in this case it was an employee of the park that was injured tragically, and permanently paralyzed, when a dramatized gunfight during a public performance went horribly wrong.

According to The Star-Ledger of Newark, New Jersey (2/9/14), a cowboy actor was shot and severely injured during a shootout dramatization that was meant to appear real to the attending patrons. Blanks were to be used, rather than real bullets.

That’s not what happened. According to court documents in a pending amusement park lawsuit, law enforcement officials at the time the accident happened contend that DaSean Kevin Sears, a 17-year-old actor in the company, was hurrying to a performance based on Butch Cassidy and the Sundance Kid and inadvertently loaded real .22-caliber bullets into a handgun, instead of blanks. Defendant Sears was to play a “bandito” in the skit, while victim Scott Harris played Wyatt Earp. The bullets, according to law enforcement officials, had been left in a locker room at the theme park.

According to the report, Harris suffered a debilitating amusement park injury when he was shot once in the forehead by Sears. As the result of his injury, Harris remains partially paralyzed and has reportedly incurred about $3 million in medical bills in the eight years since the shooting.

According to the report, there are different versions of how the real bullets found their way to the theme park locker room, and the circumstances that led up to the shooting. There are allegations the shooting was deliberate.

More AMUSEMENT PARK ACCIDENT News
In the meantime, a superior court judge is scheduled to hear motions for summary judgment filed on behalf of the defendants, holding that the park should not be forced to pay damages to Harris because he was covered under the New Jersey Workers’ Compensation Act. The motions extensively defend the park’s gun-safety program. If the judge rejects the summary motions for dismissal, a decision that is expected tomorrow (February 28), a civil trial will go ahead April 7.

According to the report, Sears pleaded guilty in 2007 to causing bodily injury with a deadly weapon and served six months’ probation. The amusement park lawsuit was originally launched in 2008, and seeks unspecified compensatory and punitive damages and costs. Named defendants include, but are not limited to Wild West City owner Michael Stabile, his sister, Mary Benson; and Western World Inc.