Two roller coaster accidents involving falls from the thrill rides have put the spotlight back on amusement park safety. The amusement park accidents, one of which was fatal, happened within days of each other and have some people asking if more can be done to prevent theme park injuries. 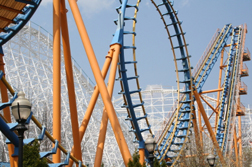 The first accident involved a woman who fell from a roller coaster called the Texas Giant at Six Flags over Texas in Arlington. According to ABC News (7/22/13), the victim reportedly expressed concern to a Six Flags employee that her lap bar might not have been secured properly, but the ride began anyhow. At some point during the ride, the woman was ejected from the car and fell approximately 75 feet to the ground. A medical examiner ruled that she died from traumatic injuries sustained in her fall.

In 2005, the Consumer Product Safety Commission (CPSC) released a study on the failure of restraints in mobile amusement rides. The CPSC found that between 2,800 and 4,300 “non-occupational emergency-room-treated injuries were associated with mobile amusement rides for each year from 1997 through 2003.” The number of those that were caused by restraint failure was unknown. Furthermore, the study noted that there were between 10 and 17 deaths from 1987 to 2001 involving a mobile amusement ride.

More AMUSEMENT PARK ACCIDENT News
“The available incident data suggests that most restraint-failure incidents involve either the restraint system unexpectedly opening during the ride cycle or the rider deliberately defeating the restraint system,” the paper’s author notes before recommending that secondary restraints on all rides that could result in a rider being thrown off if the primary restraint failed would be the most effective way to prevent injury.

In Montana, a carnival ride was closed after a rider fell from the Zipper during a state fair. In this case, the accident occurred while the ride was being unloaded and therefore not in motion. According to the Great Falls Tribune (7/31/13), although the woman required medical attention, it was not clear how serious her injuries were. She is believed to have fallen approximately 8 to 10 feet and hit her head during the fall.