An amusement park accident has resulted in the death of a 45-year-old man. The theme park accident, which was described by some as a freak accident, occurred on a go-kart track. 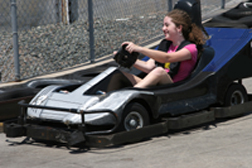 According to the Reedsburg Times-Press (7/6/13), the accident happened after a man lost control of his go-kart and collided with a wood post. The victim was pronounced dead at the scene. The go-kart track was reportedly part of the Extreme World amusement park, at which Teagan Marti suffered permanent injuries after she was dropped from the Terminal Velocity attraction before the safety net and airbag cushions were put in place.

The accident is under investigation.

Meanwhile, a study published in the journal Clinical Pediatrics (5/13) examined amusement park ride accidents involving children between 1990 and 2010. Researchers found that during that time approximately 93,000 children aged 17 or younger were taken to hospital emergency departments in the US for treatment of injuries sustained while on an amusement park ride. Yearly, there was an average of approximately 4,400 injuries.

It is not just theme park guests who are at risk of injury. The wife of a man who died while working on an air-conditioning unit at SeaWorld San Antonio has filed a lawsuit against the theme park, alleging the company failed to properly train employees and further did not provide adequate safety gear. According to Express-News (7/8/13), the victim was checking on an air-conditioning unit when he was electrocuted. Although employees attempted to assist him, he died before being flown to the hospital.