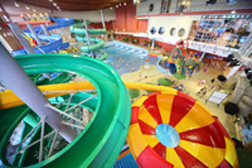 The Times Union (5/10/13) reports that a settlement has been reached in a lawsuit involving hundreds of people who claimed they became sick with a stomach virus after visiting the Six Flags Great Escape Lodge and Indoor Waterpark. The incident reportedly happened five years ago and involved approximately 600 people who allegedly contracted norovirus after visiting the park.

The lawsuit was settled for approximately $1.3 million, although in agreeing to the settlement, Great Escape said it did not believe the virus originated at its water park. Rather, the company says it settled to avoid going to trial.

The lawsuit was filed early in 2012 on behalf of approximately 100 people who alleged they became ill after visiting the lodge and water park. The lawsuit claimed the company did not keep the water park in sanitary conditions and did not notify guests when it learned of the outbreak. Plaintiffs also alleged the company allowed sick employees to work and did not shut down the park to allow it to be disinfected.

More AMUSEMENT PARK ACCIDENT News
According to the Mayo Clinic, norovirus can cause severe diarrhea and vomiting. It often causes gastrointestinal illness in people who are in areas that are closed and crowded, such as nursing homes. The virus is contagious. Although most people recover from their norovirus symptoms, illness can cause serious health issues especially in people with weakened immune systems.

Full details of the settlement have been kept confidential.

Meanwhile, a study analyzing data from the National Electronic Injury Surveillance System found that approximately 4,400 children a year are hurt on amusement park rides. Although most of the injuries are minor, around 65 children a year must be hospitalized as a result of their injuries. The study was done for the Center for Injury Research and Policy, and found that approximately 20 children a day are hurt on amusement park rides during the peak season.

The survey did not include how many children died on amusement park rides because fatalities are not included in hospital injury reports.