A teenager who suffered horrific and lasting injuries in an Amusement Park Accident, and a well-known actor who languished in negative headlines for weeks early last year, have come together in a story that injects a bit of cheer into an otherwise tragic storyline. 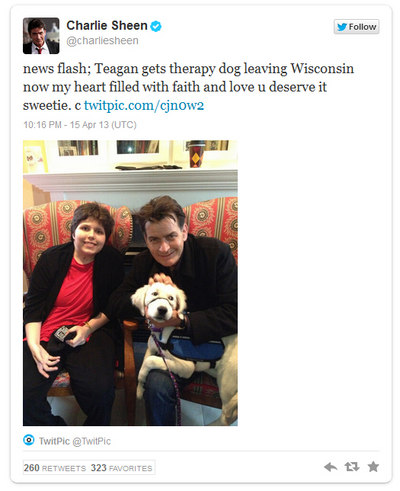 That’s because Teagan Marti, a 15-year-old resident of Parkland, Florida, may never fully recover from theme park injuries she sustained when she fell more than 100 feet - about 10 stories - from an amusement park ride in 2010.

According to a report by The Associated Press (AP) (2/15/13), Marti suffered extensive injuries in the horrific theme park accident at Extreme World in Wisconsin Dells. While harnessed to Terminal Velocity, a free-fall ride, Marti fell more than 100 feet to the ground after a series of nets and airbags designed to catch riders and cushion their decent failed to deploy.

Such theme park accidents can result in devastating injuries. For Marti, she was left with severe injuries to her spine, pelvis and internal organs when the accident occurred in July 2010. She was described as unconscious after the accident, with a gray palor and bleeding from her eyes. After three months in the hospital, Marti was released with limited use of her legs and must rely on a walker to get around.

According to news report from WTMJ 4 (8/20/10), aired three weeks after the accident, investigators blamed the amusement park accident on operator error, and an amusement park lawsuit is at play. At a press conference with Marti’s mother Julie, an attorney hired by the family spoke of plans for litigation to seek compensation the family sorely needs. The teen’s parents, according to the most recent AP report, have divorced and the family is in dire straits. While Teagan continues to recover, the family is facing foreclosure of their home.

The attorney alleged negligence on the part of the amusement park in comments to a reporter for CBS 4 Miami (8/4/11).

However, the most recent turn of events has brought some cheer to Teagan and her family, and has helped to further salvage the public perception of a much-maligned actor.

According to the AP report, Charlie Sheen is paying for the acquisition and training of a therapy dog for Teagan. Sheen was contacted through a family friend, according to the report, and wired the sum of $10,000 to the family. It will cost about $6,000 to properly train the puppy to assist Teagan with ongoing therapy, as well as turn on lights and pick up objects. The English Golden Retriever will serve as the teen’s constant companion, and Sheen has indicated he will provide additional funds to the family if needed. The picture shown above is of Sheen meeting Teagan and her new therapy dog, named Charlie. Sheen tweeted the picture on his Twitter account on April 15th.

Meanwhile, there is additional concern over theme park accidents as they relate to the so-called bouncy castles and bounce houses, popular amusements with young children. According to a report from CNNHealth (11/26/12), a massive study has found that amusement park injuries at bounce houses are on the rise.

More AMUSEMENT PARK ACCIDENT News
Dr. Gary Smith of the Center for Injury Research and Policy at Nationwide Children’s Hospital told CNN that of the nearly 65,000 children treated in US emergency departments over a 20-year period for bounce house injuries, 55 percent of bounce house theme park injuries occurred over a five-year period between 2005 and 2010, according to the study. More than half of the injured children were in the 6- to 12-year-old age group; more than a third were under the age of 5.

Nearly 1 in 5 children, or 18.5 percent, presented with head and neck injuries. Three percent of children required hospitalization, according to Amusement Park Accident Statistics contained in the study.

While theme parks are a year-round activity in southern states, other sites in northern climates will just be coming out of their dormant phase in preparation for the coming Memorial Day holiday. Sadly, a horrific theme park accident often mars an otherwise fun-filled Memorial Day for some.