Another amusement park accident lawsuit has been filed in the wake of a tragic theme park accident in which a young boy died. The roller coaster accident, which happened in 2011, resulted in the death of a three-year-old boy and has already been the focus of a lawsuit. 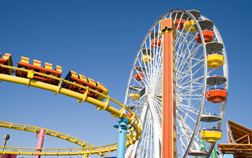 According to the Sun-Times (3/7/13), two people filed a lawsuit against Go Bananas, alleging they and their two young children were traumatized when they saw three-year-old Jayson Dansby fall from a children’s roller coaster. The young boy died from his injuries. The lawsuit claims the plaintiffs tried to get Jayson to sit down on the ride, but were unsuccessful, and after he fell out of the ride, the roller coaster ran over him even though guests yelled for the ride to stop.

Meanwhile, the family of a lifeguard who died while working has reportedly started the process toward filing a wrongful death lawsuit. According to KGBT News, the 20-year-old lifeguard died after his head was crushed by a wave generator at a water park. The family filed papers requesting information about details surrounding the incident - including photos or video surveillance footage - and information about the wave generator allegedly involved in the accident.

More AMUSEMENT PARK ACCIDENT News
Papers filed by the family reportedly allege that the trauma to the victim’s face and head was caused by the wave generator the victim was working on.

And although the ski season is winding down, a new report indicates skiers may face a greater risk of injury than previously thought, even if they are not taking unnecessary risks. A report by the Denver Post (3/19/13) notes that of 59 deaths in the past five years on groomed runs - not counting death by natural causes - none of the skiers appeared drunk, and most died after simply catching an edge or losing control. Many of those who died were experienced skiers.

Even though the number of deaths is low considering how many people visit ski resorts in Colorado, many deaths are believed to be due to reckless behavior on the part of the skier, and in at least some cases, this may not be true.