While a ski hill may not immediately come to mind as an amusement park, the fact remains that ski and snowboard enthusiasts head to the slopes in winter for recreation and amusement. While bereft of mechanical rides per se, the thrill of the ride down atop a pair of skis or a snowboard can match that of any good rollercoaster. Sadly, in the midst of such activity there is always risk for an amusement park accident. 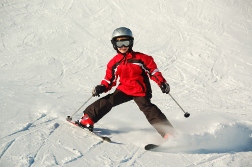 Such was the case on Christmas Eve, 2010 on a ski hill in the City of Casper, located in Wyoming. A Casper resident and her five-year-old daughter were skiing at the Hogadon ski area--a city-owned facility--when a snowboarder collided with the little girl, killing them both and severely injuring the mother. The tragic accident has resulted in an amusement park lawsuit.

Specifically, according to the Casper Star-Tribune (1/2/13), Kelli Johnson and her daughter Elise were skiing in an area at Hogadon known as Dreadnaught Run when the horrific theme park accident occurred. The report describes conditions at Dreadnaught as ‘slick’ at the time of the accident.

The snowboarder, identified in the report as 23-year-old Craig Shirley, was known for his aggressive habits on the slopes and had been cited previously for dangerous behavior. Witnesses had reportedly described Shirley as appearing intoxicated to some degree earlier in the day, and an autopsy after the accident showed the snowboarder as having trace amounts of cannabinoids in his system when the accident happened.

According to the Star-Tribune, mother and daughter had started down Dreadnaught Run on the afternoon of December 24th, 2010 when the young girl’s skis fell off about halfway down and the two stopped. That was about the same time that Shirley began his decent. It was estimated that Shirley was travelling at speeds upwards of 50 miles per hour when he collided with the two skiers. They were the only participants on the hill at the time.

The amusement park lawsuit filed by the Johnson family name the City of Casper and the Casper Mountain Ski Patrol in their action. The plaintiffs note that while Shirley allegedly had a history of reckless behavior on the slopes and had been cited previously, the ski patrol allegedly made no effort to restrict Shirley’s activity, or warn the Johnson family about an aggressive snowboarder sharing the run with them.

More AMUSEMENT PARK ACCIDENT News
Theme park accidents often occur in tandem with poorly-maintained equipment. In the case of the Johnson family, they claim that the City of Casper and the Casper Mountain Ski Patrol are responsible for the death of their daughter and the injuries to Kelli Johnson, given that the ski patrol??"as alleged??"made no effort to warn Shirley of his behavior and the potential risk to himself and other participants, or to warn Kelli Johnson that an aggressive snowboarder was sharing the hill with them.

Amusement park deaths are not only the most tragic extreme of a theme park designed for fun and amusement, it is also heartbreaking when it happens to a child. Its occurrence on Christmas Eve makes the accident for the plaintiffs all that more devastating.

The lawsuit was filed December 28, 2012 at Natrona County District Court and was registered as Chauncy Johnson, Kelli Johnson and two minors v. The City of Casper, and Casper Mountain Ski Patrol, regarding Estate of Elise Johnson, personal injury, according to a release by the Seventh District Court.