Florida Man Died from his Airbag Injuries in 2016

Thankfully, there appears to be little new on the airbag injuries front since the horrific airbag injuries suffered by teen Karina Dorado back in March, when the recalled Takata airbag inflator in her used car blew apart following a relatively minor collision, sending shards of shrapnel into her throat and trachea, damaging her vocal chords. 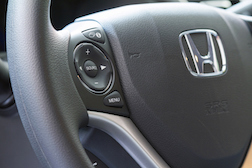 Honda indicated further that the ignition switch in the car was in the ‘on’ position, which would have armed the defective airbag. However it is not clear as to why the airbag deployed. While Honda said it has not been in any position to inspect the car, a spokesperson said that police photographs show the metal inflator ruptured when the airbag deployed, sending shards of metal throughout the passenger compartment, where the man was working.

“The rupture most likely contributed to his death,” Honda spokesman Chris Martin said, in comments published in the LA Times. The victim was not identified. However his death represents the 12th person to die in the US due to the defective airbags, taking the global death toll to 17.

Honda says it only recently learned of the incident, although it happened June 18 of last year at a residence in Hialeah, Florida. The victim died the following day. The individual who was working on the 2001 Accord was not the owner, according to Honda. The manufacturer recommends disconnecting the battery when working on, or around the airbag system.

Dorado, meanwhile, is lucky to be alive.

The 18 year-old Las Vegas resident is among nearly 200 individuals injured or killed by metal airbag inflators, shattered when the propellant inside them becomes unstable over time. And while the automotive world is still reeling over the Takata airbag recall – the largest automotive recall in US history – a related issue is bubbling up from under the surface. Used, or recycled airbags that were under an airbag failure recall and were not handled properly.

As is now widely known, Dorado’s used Honda had been in a wreck under a different owner, given a salvage title, repaired and sold as a used car. Dorado’s father bought the car for his daughter, to facilitate her commute to work. The Associated Press (AP) reported that following the accident, engineers from Honda inspected Dorado’s car and confirmed that, indeed the inflator had blown apart when the defective airbag deployed. The serial number of the airbag was traced to a 2001 Honda Accord – a different car than Dorado’s – and an airbag which had been subject to a recall, but the inflator had not been replaced.

The 2001 Honda Accord that proved the source of the recalled airbag that found its way into Dorado’s car, is the same make, model and year as the car in Florida that was associated with the death of the Hialeah man. Various media outlets, including the Los Angeles Times and the Associated Press, have confirmed the 2001 Honda Accord carries a Takata airbag as original equipment – an airbag that is particularly problematic and one of the most dangerous types manufactured by Takata.

A spokesperson from Honda told AP that the defective airbag may have been removed from the original car by a salvage yard – or, it may have been stolen.

Of concern to anyone worried about airbag injuries stemming from the recycled airbag market is the lack of oversight, according to AP. It is not illegal for airbag assemblies – or other recalled parts, for that matter – to be removed from wrecked cars and sold by salvage yards to repair shops. There is no federal government oversight beyond current efforts by the National Highway Traffic Safety Administration (NHTSA) to discourage salvage yards against knowingly selling a recalled part.

Michael Brooks, acting director of the Center for Auto Safety – a not-for-profit – tells AP that “what there should be is a program that prevents old airbags from being recycled.”

“It’s a tragedy that shouldn't have happened,” said Billie-Marie Morrison, one of the attorneys representing the Dorado family in an airbag failure lawsuit filed last month in Nevada state court, in comments to AP. “You would think in today’s age with communications technology these types of things should not be allowed to happen.”

Morrison, in separate comments to CBS4 Miami (05/17/17), said unknown persons “took the airbag, a recalled airbag, out of one car, a Honda, and put it into this car and resold it.”

Experts say that any consumer having purchased a used car – or in the active throes of buying one – can have a mechanic obtain the serial number of the airbag and trace it, to determine if the airbag was subject to an airbag recall.

It’s also possible to check a government database of recalled vehicles for potential recalls that had not been addressed. The NHTSA undertakes such a site. However, had Karina Dorado’s father checked the used car he had just purchased against the NHTSA database using the car’s VIN number, he would have found that the car was identified as having zero outstanding recalls. AP crossed-checked the VIN number and found that the previous owners of the car had the airbag inflator replaced twice, under recalls.

More DEFECTIVE AIRBAG INJURY News
Then the car was wrecked – in Phoenix. When repaired, the car’s previous history of completed recalls was suddenly null and void when a recalled airbag was recycled and placed in Dorado’s vehicle.

The Takata airbag that had been installed in the Dorado vehicle was identified as one of the most dangerous manufactured by Takata, as suggested above. Testing showed that inflators removed from older-model Hondas presented with a 50 percent risk of blowing apart.

Honda, for its part, maintains a buy-back program where it will purchase used airbags manufactured by Takata, to get them out of circulation. They have purchased 60,000 so far. But as commendable as that effort is, it’s a drop in the bucket when compared against the 100 million vehicles which have been recalled globally.