The dead do not tell tales about airbag injuries, and there are sixteen people around the world (11 in the US alone) who can no longer speak for themselves after shrapnel from an airbag failure ripped into them and snuffed out their lives in deaths that the Associated Press (AP 06/26/17) characterize as “grisly.” 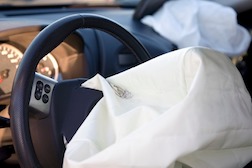 Karina Dorado continues to be the modern-day poster child for the aftermath of an encounter with a defective airbag. The young woman from Las Vegas had been driving a used vehicle purchased for her by her father to commute back and forth to her job, when a relatively minor collision triggered the airbag in her car. Airbags, says WKMG News 6 Orlando (08/08/17) can, and do save lives.

However in Dorado’s case, the defective airbag in her car had been manufactured by Takata with ammonium nitrate, a chemical inflator that’s less expensive to use than competitors but more volatile and unstable the older it gets, a risk exacerbated in hot, humid climates. Airbag casings, which are not designed to come apart, cannot withstand the intense force and shatter, sending shards of metal to unsuspecting occupants.

Dorado was hit in the throat and trachea, and is lucky to be alive. Dorado’s airbag injuries lawyer, Billie-Marie Morrison, told AP that her client has undergone several surgical procedures to repair airbag injuries to her neck and vocal cords – but her voice will never be the same.

“The big problem is the airbags are still out there. They're like bombs waiting to explode,” said Morrison, in comments to WKMG.

Dorado’s story is ricocheting across the country, as the basis for a new spin on the Takata defective airbag issue: defective airbags that are recycled and find their way into used, or repaired cars. The issue has become the new ‘Ground Zero’ for the defective airbag problem, and will likely result in a plethora of airbag lawsuits for some time to come.

It’s not just grievous airbag injuries that happen when a defective airbag deploys – but the fear that comes from the so-called ‘ticking time bombs’ that recalled airbags, in fact, are.

And that phrase has been used by others. Chris Basso, of CarFax, has become a go-to spokesperson for the recycled airbag issue. He told WKMG News 6 last week that, “you could definitely be driving around in a ticking time bomb that could kill you, if you are ever in an accident.”

Takata, the Japanese manufacturer, has taken the most grievous corporate hit possible for its role in making the decision years ago to switch to a less-expensive chemical inflator for their airbags, in spite of knowledge the chemical is known for instability and degradation over time. Takata has since filed for bankruptcy with most of its operations sold off to another entity, although it has been reported that a small component of Takata will remain intact to continue with the airbag recall and replacement.

An unfortunate backstory to the unwise Takata decision to go with ammonium nitrate for their inflators is the phenomenal success the Japanese manufacturer enjoyed in supplying their products to the global automotive industry. To date, no fewer than 70 million defective side airbags, curtain airbags and primary airbags found their way into
42 million vehicles made by 19 different manufacturers.

AP says it will take years to clear the backlog. Until then, vehicle owners are driving in those so-called ‘ticking time bombs.’

WKMG in Orlando notes that part of the problem lay with vehicle owners not undertaking their due diligence when recall notices arrive in the mail. There is no cost for a recall replacement – all it takes is some time on the part of the owner to make the call, book the appointment then take the vehicle in to have it done.

But sometimes the wait is extended when parts are not available. And there appears to be little or no regulation that forces a vehicle owner to have it done. All the manufacturer can do is issue the recall notice – perhaps repeatedly – to the owner.

Were that vehicle to become a trade-in and re-sold as a used car, the risk of the recalled airbag having gone un-repaired is passed along to the next unsuspecting owner.

But then there is the Dorado case, and what propelled the young Las Vegas woman to the hospital with serious airbag injuries.

Here, a car controlled by a previous owner was wrecked, given a salvage title, sold as salvage, then amazingly repaired and put back on the road as a used car. The original airbag, which had deployed in the wreck and could not be refurbished, was replaced with a used airbag which had been salvaged intact from another car. An investigation following the Dorado accident determined that a Takata airbag that had been removed from a third vehicle intact was installed in the car that Dorado had been driving. The airbag had been subject to a recall. Where the airbag may have been sourced – either from a salvage yard or wrecking yard, a used parts vendor – or purchased online – could not be determined. But it was the defective Takata airbag included in an airbag recall that was responsible for seriously injuring the young woman in a crash from which, in any other circumstance, she should have walked away.

The AP report, carried by the Hamilton Spectator in Ontario Canada this past June (06/26/17), noted that given the depth and breadth of the Takata airbag recall – together with the lack of available parts and the inability, or ignorance on the part of some owners to follow through on the recall – combines to suggest it will take years for the recall to complete, if ever. AP reports that the last group of US repairs is not scheduled to even begin until September, 2020 – this, according to the National Highway Traffic Safety Administration (NHTSA), which oversees the recall.

Even more compelling is the fact that just over a third – 38 percent – of vehicles in the US have been repaired under the current optional recall system observed by North America (there is nothing forcing drivers from following through). Compare that, however with Japan, which has already reached a level of 70 percent compliance (according to Takata, anyway). It should be noted that Japan forbids a vehicle registration to be renewed if there are any outstanding recalls on said vehicle; the repairs have to be completed first, before the car can return to the road.

There is no such requirement in the US.

Nor, to our knowledge, is there any requirement for a vendor of a used car to warrant that there are no outstanding recalls with the vehicle, beyond the obligatory safety inspection. It is up to the buyer to determine whether, or not the prospective purchase is recall-free. WKMG reports that it costs about $60 to have a mechanic remove, and inspect a vehicle’s airbag for recall status, but try doing that to a car you as yet, do not own.

No, it is up to the buyer after the fact to check recall status through the vehicle VIN # with Safecar.gov, or by contacting the manufacturer.

More DEFECTIVE AIRBAG INJURY News
Meanwhile, a used parts supplier interviewed by WKMG News 6 said that selling a used part such as a defective airbag subject to an airbag recall “should be against the law,” said Tim McMillon, owner of M&K Auto Parts in Orange City, Florida. He ensures that any car that comes through his facility that has a recalled airbag, said airbag goes back to the manufacturer. “What we try to do is to get these airbags out of the car immediately, and give them to somebody who can actually give them back to [the manufacturer of the car], so they’re not [on the road], they’re not in the industry, nobody’s trying to buy them…”

But it’s up to the salvage yard to police its own behavior. And the NHTSA has opted to attempt to turn the tide through education, not enforcement.

It’s a compelling problem that will be with us for some years. In the meantime, until the vast majority of defective Takata airbags subject to the airbag recall are replaced – and until laws are passed protecting the used car buyer – innocents like Karina Dorado will continue to be at risk for airbag injury.

Posted by
D Colbert
on August 29, 2017
An Utter Catastrophe! I urge all readers to habe their airbags checked immediately.