Recycled Airbags Can be Checked, but Most Aren’t

Percolating just under the radar of the massive Takata airbag recall (and subsequent bankruptcy of the Japanese manufacturer) are airbag injuries resulting from use of recycled airbags in repaired vehicles either worthy of repair, or which had been deemed as salvage for scrap and parts but incredibly, were repaired and returned to the road. 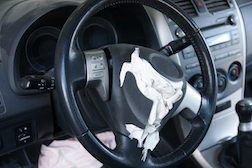 At issue are salvaged, recycled airbags that are taken from one vehicle and installed into another. Provided the airbag had not been previously deployed, a recycled airbag and inflator removed intact from a vehicle and properly installed in another car is, on the surface not a cause for worry, according to experts.

The assumption, however is that the airbag deemed reusable is properly vetted and checked for integrity, as well as any previous recalls which may, or may not have been carried out by the previous owner.

The aforementioned is an important key – the failure of which is cited in the horrific story of a Nevada teen who suffered serious injuries when a relatively minor frontal impact triggered the deployment of a previously-recalled Takata airbag using the now-vilified ammonium nitrate inflator. The unstable chemical shattered the inflator casing, sending shards of shrapnel into Karina Dorado’s throat and trachea, and leaving the teen with severe airbag injuries.

The car had been purchased used on her behalf by the teen’s father for commuting to, and from her job. Unbeknownst to the family, the car had been totaled in a wreck and given a salvage certificate. However the car was purchased as salvage and repaired, using what turned out to be an intact Takata airbag previously recalled. The recalled airbag was not checked or verified before installation into the salvaged car, or so it is alleged. When the relatively minor front-end collision occurred, the airbag deployed and the defective airbag severely injured the driver.

She is lucky to be alive. Other airbag injury victims have suffered severe lacerations to the carotid arteries in the neck, instantly putting the driver in grave danger of life-ending blood loss. Other airbag injuries have involved the chest, face and even the eyes. There have been at least 11 deaths.

Chris Basso of CarFax has been called upon a lot to comment on this file in recent months – as he was in June by FOX6NOW (06/12/17). While some body shops insist on using new airbags that come directly from the manufacturer and have not been subject to an airbag recall, other enterprises will gladly use recycled airbags for the cost-savings.

In theory, Basso says to FOX6NOW in Milwaukee, there’s nothing wrong with the practice – provided the necessary checks and balances are in place.

“The problem is when these airbags aren’t properly checked, it can allow the recalled airbags to slip through the cracks,” said Basso.

FOX6NOW spoke to Larry Force, identified as the service manager at a Chrysler Dealership in Milwaukee. “After-market companies acquire used airbags or used shells and then rebuild them and then re-market them,” said Force.

In this way, a recalled airbag – such as the recalled Takata airbags that have been the subject of so many airbag lawsuits and airbag injuries – finds its way into another car, with the potential for disastrous and sometimes heartbreaking results.

Basso said in comments to FOX6NOW that it’s possible for a mechanic to verify if the airbag in a car is original equipment, or is a replacement airbag and if so, the airbag’s history. “[The mechanic] can remove the airbag cover, look at the serial number and figure out where that airbag came from, if it’s a recycled unit and it’s been recalled,” said Basso.

Basso also told FOX6NOW that CarFax, the firm he represents, employs an airbag check tool. Through use of the tool, consumers can determine if an airbag has been deployed and – if so – whether or not the deployment was properly reported.

More DEFECTIVE AIRBAG INJURY News
Part of the problem, it appears, is that consumers are not generally aware of the widespread use of recycled airbags in repaired vehicles – and may not be aware of the various methodologies and opportunities to check for the presence of a recycled and potentially recalled airbag.

Some consumers may not be aware that the used car they just purchased may have been in a wreck, and may have been substantively repaired with questionable parts. With the massive scope of the Takata airbag recall now clouded by the Takata bankruptcy, together with the near-impossible challenge of replacing compromised airbags in a timely manner, the potential for airbag injuries will remain pervasive for some time to come.

The migration of recalled, but intact Takata airbags through other pathways such as salvage and automotive repair only expands the risk – providing another avenue of litigation for injured plaintiffs seeking damages for airbag injuries from defective airbags, regardless of the situation and circumstances involved.