Karina Dorado appears, by circumstance, to have become the latest poster child for airbag injuries. The 18-year-old Nevada resident was involved in a relatively minor front-end collision earlier this year from which most people would walk away. However, the force with which the driver’s side airbag in her used Honda Accord deployed shattered the inflator casing, sending shards of shrapnel into the young woman’s throat. She very nearly died. 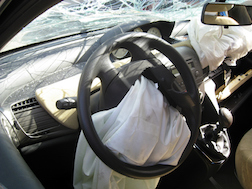 The circumstances surrounding the event are complex with many moving parts. The airbag responsible for the airbag failure is a recalled airbag made by Takata, the Japanese manufacturer that recently filed for bankruptcy and had been the focus of the largest automotive recall in US history.

But there’s more to the story than that. Dorado’s car – purchased for her as a used vehicle by her father in March of 2016 so she could commute to, and from her job – had been in a wreck, given a salvage title and sold as salvaged goods, only to be repaired with recycled airbags and put back on the market. That’s where Karina’s father found the now-repaired vehicle and purchased it for his daughter in good faith.

The defective airbag that sent shards of sharp metal into the unsuspecting teen’s trachea had been the subject of an airbag recall associated with the original Honda Accord from which – presumably for purposes of salvage – the defective airbag had been removed intact, only to find its way into the Dorado car. The journey of that airbag had not been tracked or documented. Dorado had no idea her car had been involved in a wreck and written off as salvage, only to be repaired and put back on the road. Nor could she have known the airbag in her car had come from another car – and had been the subject of an airbag recall as defective.

The situation makes an already complex issue even more so, especially in light of the bankruptcy announcement by Takata during the last week of June. With a debt load of $9 billion, according to reports issued by CNNMoney, exacerbated by record fines and penalties for manufacturing defective airbags and allowing them onto the market while knowing the risks, Takata finally imploded. It has been reported that Key Safety Systems (KSS), a Michigan-based enterprise with Chinese ownership, will acquire nearly all of Takata’s operations and assets for $1.6 billion.

Takata’s airbag inflator division, however will not be acquired by KSS and there will be likely no other takers, given the massive liability. The defective airbag division at Takata will likely be wound down, and thereby removing a target for litigation and a resource for compensation on behalf of victims who have suffered sometimes horrific airbag injuries.

There have also been 11 deaths when defective airbags – designed to add safety and support the survivability of an occupant in a serious collision – have deployed with such force that the metal inflator casing, designed to remain intact is instead shattered, sending shards of metal towards occupants. There have been injuries to eyes, the face, the neck and throat. Carotid arteries in the neck have been punctured, with devastating and heartbreaking results.

Takata, years ago, switched to ammonium nitrate for its airbag inflation mechanisms. Ammonium nitrate is less expensive than the inflator Takata had been using, a propellant deemed relatively safe. In contrast, ammonium nitrate can – and has proven – to become unstable in areas of high humidity or temperature change, and with age. When it becomes unstable, all bets are off as to how it behaves when a sensor detects a collision with sufficient force to trigger the airbag to deploy.

The demise of Takata is the closing of one chapter. But the remainder of the playbook is very much at play, open and active. The airbag recall is sufficiently massive that only a relatively small number of defective airbags have been replaced. With Takata out of the picture, what happens now? The massive airbag recall impacted 19 different automakers in total, with vehicles manufactured over a 13-year span extending from 2002 through 2015.

And what of the used airbag market and airbag recycling? According to WTSP 10News Tampa Bay/Sarasota (05/21/17) an estimated 750,000 airbags are replaced each year as the result of deployment. A single airbag – new - can cost anywhere from $1,500 to $3,000 to replace, so says Christopher Basso of Carfax. Used airbags – salvaged from other cars – can be had from salvage yards for substantially less. While most insurance companies will insist that new airbags are used to repair a vehicle, private individuals footing the bill themselves – either to fix their own car without involving insurance or repairing a wreck for resale – will often opt for the cheaper route.

“Often times when a car is in an accident and the airbags deploy, recycled airbags are used to fix the vehicle,” said Basso, in comments to 10News.

And Basso says there’s no easy and surefire way to track recycled airbags. For one thing, once a recalled airbag has been removed from the original vehicle (presumably a wreck where the airbag didn’t deploy), it’s no longer with the original car and thus disconnected from its history. Salvage yards are not supposed to knowingly sell a recalled or potentially unsafe airbag that has been salvaged. However, the regulations are voluntary. While the National Highway Traffic Safety Administration (NHTSA) has jurisdiction over policing the used airbag issue, the agency chooses to administer its authority through education, rather than chasing after salvage yards that drop the ball and levy fines accordingly.

The brand and serial number of an airbag stays with the airbag. However, thus far it falls to the concerned consumer to track the origins of a used airbag. There is no national registry.

Basso of Carfax echoes the cautionary notes of others when he says any consumer buying a used car needs to know the car’s history. If it has been in a wreck, and repaired (or been given a salvage title), that information is tracked through Carfax with the vehicle’s VIN number. If the airbag had deployed in the accident, then the car will have a replacement airbag.

According to WPRI News12 New Jersey (05/22/17), the only way of knowing if that airbag is safe – and not on the recall list – is to have a mechanic check the brand and serial number, for a cost of a few hundred dollars.

That’s the only way to avoid the heartbreaking airbag injuries suffered by Karina Dorado, and so many like her.

Posted by
Chris Hughes
on July 10, 2017
I was in a severe accident December 30, 2016 with my 2015 BMW 328i and my back was fractured on T11 and T12 and I think it was because of the Tamara airbags. BMW wanted me to take a survey for a $100 gift card immediately after (days) - probably so they could distract me from the flawed airbags. I bought a 2017 BMW X1 and o got a notice a month or so ago about ITS airbags needing replaced. I will have back injury problems now for the rest of my life and I can't work because of it and Social Security keeps denying me! I need to discuss with an attorney my option please.

Posted by
Tim
on July 9, 2017
I have called multiple times to Cerritos dodge to get the passenger airbag fixed per the recall S43/NHTSA 16V-352.
After being hung up on 3 times, I finally got someone in the repair center who promised to call back the following week, (that was a month ago!).
I then called the recall administrator who called Cerritos dodge, the administrator was told the recall coordinator was out of the office, and that they would call me back the following week, (that was 3 weeks ago!)
Apparently dodge's new business model is to suck up to get the sale, then ignore them in hopes they'll just go away.