An otherwise minor crash in a car with a recalled airbag not only caused the young female driver emotional trauma, pain and injuries to her neck and vocal cords, but also speaks to just how a defective airbag got into her car in the first place, together with the lack of effective oversight. 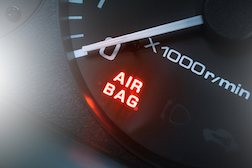 Takata airbags that use ammonium nitrate as an inflator have served as the foundation for the largest automotive recall in US history. There have been allegations that Takata Corp. knew that ammonium nitrate was subject to instability with age, rapid changes in temperature and high humidity, but made the switch anyway due to lower cost. Unstable ammonium nitrate can unleash too much force when an airbag is inflated, shattering the inflator casing and sending shards of metal shrapnel into the passenger compartment.

That has happened to more than 200 people worldwide. Sixteen have died. The remainder have suffered airbag injuries – some horrific.

The Associated Press (04/28/17) back in April reported on the circumstances of Karina Dorado, of Las Vegas. Her father Jose had purchased a used car for his daughter so she could commute to, and from her job at a call center.

And thus, Karina was driving her 2002 Honda Accord one day when a relatively minor collision triggered the airbags designed to allow a driver and passenger to walk away from a collision not considered to be serious.

But it was serious for Karina. The airbag in her car turned out to be a recalled airbag that deployed with such force that it sent shards of metal from the shattered casing into her neck. The 18-year-old was rushed to the hospital for treatment of injuries caused by airbag failure – specifically shards of metal that pierced her trachea and injured her vocal cords. As of April, Karina still had an opening in her trachea requiring surgical repair at a later date. Her voice was reported to be slowly coming back, but it was raspy and AP reported that she may require speech therapy.

The family is talking to an airbag injuries lawyer.

The specifics as to how the recalled airbag wound up in the car, is troubling. The defective airbag, in reality was not original equipment in the car.

It turns out the 2002 Honda Accord Jose Dorado bought for his daughter was wrecked in a 2015 car crash and written off by the insurance company as a total loss.

The story might have ended there – sparing Dorado or any other occupant airbag injury. But it didn’t. AP was able to trace the car through AutoCheck, and determined the car was given a salvage title, repaired and resold in Los Vegas. Jose Dorado bought the car, without knowing its history.

There’s more. An inspection of the car by Honda engineers following the crash revealed that the drivers’ side airbag was not original equipment with the car (a 2002 Honda Accord), but rather sourced from a different Honda Accord that was a year older. A Honda spokesperson told AP that the airbag must have been removed by a salvage yard, or perhaps stolen.

Either way, it was determined that the defective airbag from the older, 2001 Honda Accord had been the subject of a recall for the inflator, but did not have the inflator replaced. The defective airbag somehow wound up at the repair shop fixing the seriously-damaged 2002 Honda Accord, which now contained a recalled airbag that would never be replaced because the new owner of the car had no idea as to its history.

A federal law passed in 2000 prohibits salvage yards and other entities from selling recalled parts sourced from wrecked vehicles, for use in auto repairs. But without a centralized database there is no reliable way of finding out whether, or not an airbag eyed for reuse, has been recalled.

More DEFECTIVE AIRBAG INJURY News
And the law against selling recalled parts for use in auto repair is rarely enforced. The National Highway Traffic Safety Administration (NHTSA) has the jurisdiction and authority to impose, and enforce civil penalties against potential violators of the law. However, the NHTSA is focused more on educating the salvage and recycling industry about the problem, rather than enforcing the law.

And AP reports while the federal law prohibiting the sale of recalled parts for use in auto repair has been on the books for 17 years; there is no similar law that prohibits the sale of a used car that carries a recalled part.

Jose Dorado had no idea the car he provided for his daughter to commute to work, was a ticking time bomb capable of causing airbag injuries.

However the airbag failure did just that. The Dorados are now working with their airbag injury lawyers in the pursuit of compensation.