2017 Expected to be a Landmark Year for Airbag Injury Litigation

2017 is shaping up to be a landmark year for Takata Corp. and lawsuits alleging airbag injuries. The sheer magnitude of the defective airbags recall, the unavailability of replacement parts and Takata’s financial health (reported to be tenuous), combines to create a portfolio of interest likely to wane little as the year unfolds. 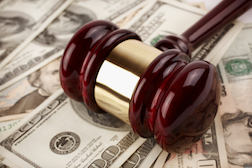 And now there is word of a sweeping settlement that could resolve one aspect of airbag failure litigation over the next few weeks or months. The New York Times (12/29/16) is reporting that Takata is nearing a settlement with federal prosecutors in the US Department of Justice. While the potential settlement, if forthcoming, will not resolve individual or class action lawsuits, the settlement would nonetheless put to bed Takata’s problems with the feds over the alleged defective airbags and whatever shortcomings might have been involved surrounding the airbag recall.

The New York Times referenced individuals close to the discussions as saying the penalty to resolve the federal dispute could be as high as $1 billion.

The size and breadth of the liability has pundits wondering about the future health of Takata, which The New York Times reports as having lost $130 million in 2015. Law 360 (01/02/17), reports that Takata had been talking about placing TK Holdings Inc., Takata’s US unit, into bankruptcy as recently as November.

Airbag injuries have reportedly been traumatic, according to various airbag failure lawsuits. One woman received a metal shard directly into her eye. Another saw shards slice into her neck, just missing her carotid artery. At least 11 deaths have been attributed to Takata airbags which were designed – as all airbags are – to protect occupants in the event of frontal, and side collisions (side airbags and curtain airbags).

Instead, airbags and their components are allegedly causing injuries themselves that have little to do with collisions.

More DEFECTIVE AIRBAG INJURY News
It has been known for some time that Takata uses ammonium nitrate as a propellant in its airbags – a compound known to become unstable when introduced to high humidity and moisture. The New York Times reports that in the 1990s a rival airbag supplier, identified as Autoliv, tested ammonium nitrate and determined it to be too dangerous for use as an airbag propellant. It has been alleged that Takata was aware of the issue, but pressed ahead nonetheless and switched to the less-expensive ammonium nitrate in the early 2000s.

Takata has admitted to manipulating test results, but maintains such conduct was not related to airbag ruptures that have resulted in airbag injuries and death.

A total of 19 automotive manufacturers have recalled 42 million vehicles over the defective airbag problem. More than 180 airbag injuries have been reported in the US.

If you or a loved one have suffered losses in this case, please click the link below and your complaint will be sent to an automotive accidents lawyer who may evaluate your Defective Airbag Injury claim at no cost or obligation.
Request Legal Help Now

Posted by
John Lowrie
on January 25, 2017
My wife was rear ended from a car at full speed yesterday. She then hit two cars after hitting her head on steering wheel and passing out briefly. She was driving a 2004 Honda Odyssey. Why would the airbag not inflate? She has a concussion and a sprained neck.