Serena Martinez had no idea that when she exited her car following a low-speed collision, she was three inches from death. The airbag had deployed and ruptured, spraying the driver with shrapnel and leaving the Texas woman with airbag injuries to her arms and chest. A passerby instructed Martinez to lie on the ground and remain calm, until paramedics arrived. 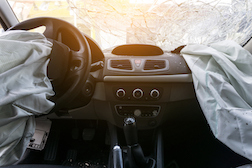 What Martinez didn’t realize at the time was that the shard from the ruptured airbag that pierced her chest was about three inches from her carotid artery. Had that artery been punctured, Martinez could have died.

Others have indeed perished from their injuries. According to Reuters (11/2/16) there have been at least 16 deaths primarily in the US linked to defective airbags. More than 150 people have been injured. Some of those airbag injuries have been severe, such as shards of metal puncturing one woman’s eye. Another woman was so badly lacerated that first responders mistakenly thought the victim had been stabbed. That victim died.

The problem, according to Reuters and information associated with what has become the largest automotive recall in US history, is the use of ammonium nitrate as a propellant. Airbags, such as primary airbags and side airbags, are designed to inflate rapidly and protect the occupant in the event of a collision. Instead, defective airbags have been exploding due, it has been reported, to a problem linked with ammonium nitrate having become unstable. Not only does the airbag itself explode, but the containment casing has been seen to disintegrate in kind, sending shards of metal out into the passenger compartment.

Reuters reports that regulators in the US have ordered defective airbag manufacturer Takata to recall all airbags containing ammonium nitrate without a drying agent by 2019. Ammonium nitrate has been known to become unstable in areas of high humidity, or in association with rapid changes in temperature. When this happens, defective airbags such as side curtain airbags and other airbags in the passenger cabin can become susceptible to rupturing at low-velocity collisions, or from a bump in the road.

Reuters reports there are some in the automotive industry fighting the move to recall all airbags using ammonium nitrate without a drying agent, suggesting the recall is not necessary.

Even if automakers are held to, and meet that 2019 deadline, the resolution is still at least two years away.

More DEFECTIVE AIRBAG INJURY News
“Because of their decision to use a propellant known for its dangerous properties, Takata airbags are killing and maiming drivers and passengers across the country involved in otherwise minor and survivable accidents,” the Martinez airbag lawsuit said.

While Martinez survived, the Houston Chronical (11/01/16) reports the Cinco Ranch woman has suffered nightmares and anxiety related to driving, and has sought therapy. Had the airbag performed properly when her 2002 Honda Accord was struck September 11th of this year by another car on the front passenger side, it has been speculated that Martinez should have walked away with, at most, a sore back.

“I felt a burning pain in my chest,” Martinez recalled to the Houston Chronicle in late October, in concert with the filing of her $1 million lawsuit against American Honda Motor Co. Inc. and Takata Corporation.