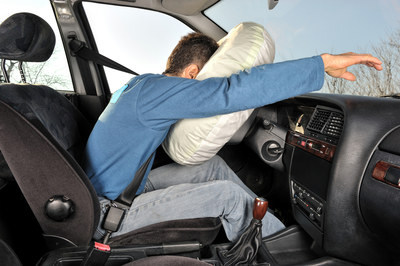 According to an airbag failure lawsuit Ebron filed earlier this month, the North Carolina plaintiff alleges the airbag in his 2014 Chevrolet Silverado deployed without a collision initially taking place. The force of the airbag is alleged to have resulted in several broken bones to his face – and the force rendered him unconscious. His defective airbags lawsuit goes on to say that while unconscious, his foot remained on the vehicle accelerator, causing his vehicle to strike a utility pole, followed by a tree. The impact is alleged to have caused additional injuries to the plaintiff.

Another defective airbags lawsuit has been filed by plaintiff Valissa McNiel Dillard, who alleges to have suffered severe brain damage and other catastrophic injuries to her body – including the loss of an eye – when the airbag in her 2001 Honda Accord deployed with what is alleged to be excessive force.

Various other defective airbag plaintiffs have alleged similar injuries, including shrapnel from the airbag containment unit flying out and striking the driver. Some have died when side airbags, curtain airbags and defective airbags in general have deployed with excessive force, or deployed at the wrong time.

Ebron claims in his airbag recall lawsuit that both General Motors (GM) and Takata Corp. knew about issues with airbags as early as 2001, when a Takata airbag exploded in an Isuzu vehicle, or so it is alleged. Ebron further alleges in his airbag failure lawsuit that both GM and Takata actively hid the problem from both vehicle owners and the National Highway Transportation Safety Administration (NHTSA).

Ebron claims that a faulty Takata airbag in his 2014 Silverado served as the “direct and proximate” cause of his injuries.

There remains the suggestion of an issue, however, with the Ebron complaint. Spokespersons for both Takata and GM noted, in response to the Ebron lawsuit, that Takata does not supply the driver’s-side airbag in the 2014 Silverado – only the passenger side.

More AIRBAG INJURY News
Be that as it may, both lawsuits asserted that defective airbags manufactured by Takata resulted in 14 deaths and in excess of 100 injuries. Millions of vehicles have been tagged in an airbag recall and a $200 million consent decree exists between Takata and the NHTSA.

Inflators, according to court documents, can be compromised through age and exposure to high humidity.

The two airbag injury lawsuits seek, in combination, more than $500 million in compensation and in excess of $1 billion in punitive damages.

We (my wife and I) live in NY - Nassau County, NY. We had inadvertent airbags accident while driving in April 2016. The airbag in our 2009 AUCRA TSX deployed inadvertently while driving -- without any contact with any other vehicle or any other accident. All the six airbags in the car were deployed untimely. The force of the airbag deployment resulted in several broken bones to the driver and the passenger. In addition, the seatbelt were deployed with excessive forces causing our sternums cracked.

When the airbags were deployed, they hit our face with great force knocking us out, our eye glasses were shattered –y both the driver and the passenger were unconscious. The car continued in motion, as the car’s engine and electrical supply were not cut-off. While unconscious, the driver’s foot remained on the gas pedal providing fuel to the engine, causing the vehicle to strike a tree on the road side resulting in more injury to the occupants and the car.

My wife has 17-18 broken limbs, and she went through two major surgeries for fixing both broken hips, and a rotated right shoulder. She is undergoing slow recovery after 8 months of PT and treatment.

I would appreciate a consultation on this case to see how to proceed. And I look forward to hear from you shortly.