The airbag injuries file involving airbags manufactured by Takata and currently in use in millions of cars, has taken an interesting turn with the crash last month in Texas of a truck carrying a supply of parts used in the manufacture of Takata airbags. 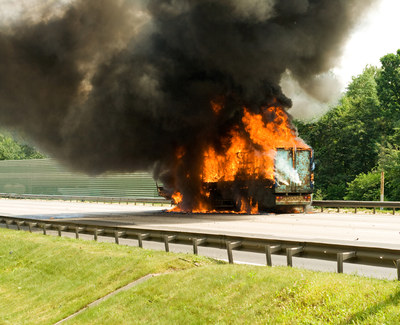 According to various reports the truck was transporting a load of Takata airbag components when the driver failed to negotiate a turn in Quemado, Texas and the truck crashed. When it did so, an explosion and fire impacted a nearby home, which caught fire and ultimately led to the death of a 64-year-old resident. Four others were injured in the explosion and fire.

While there is no word as to how the truck itself was equipped in terms of airbags to protect the occupants – side airbags, curtain airbags and so on – what is of interest to critics and pundits remains the cargo in the tractor-trailer that may have triggered, or contributed to the catastrophe.

To that end, US Senators Richard Blumenthal (D-Conn.), and Edward J. Markey (D-Mass.) last month went after the National Transportation Safety Board (NTSB) in an effort to explain why the explosion happened and what role, if any the Takata cargo on the truck may have played in the disaster.

It has since been determined that the cargo consisted of Takata airbag inflators and propellant. The Senators have said the Takata airbag components contain ammonium nitrate, a compound used in agricultural fertilizers so volatile in nature that it is also employed as an explosive for the construction and mining industry.

In a joint statement, Senators Blumenthal and Markey said: “We already know Takata has endangered millions behind the wheel – the recent tragedy in Texas raises questions about how many millions more are in harm’s way because of Takata’s practices transporting its hazardous product.”

A year ago, Blumenthal and Markey lobbied Takata to recall any vehicle on the road with defective airbags associated with ammonium nitrate.

It is not known, at this juncture, what role ammonium nitrate may, or may not have played in airbag injuries. There have already been massive recalls after defective airbags have been found to injure drivers and passengers following deployment of Takata airbags having deployed with such force, casings used to contain the collapsed airbags blow apart, sending shrapnel out into the passenger compartment.

There have also been allegations that propellant can become unstable during fluctuations in temperature.

So far, there have been at least 10 deaths and 100 airbag injuries in the US associated with Takata airbag inflators. This past May the NTSB, which continues to investigate, increased the size of the Takata defective airbags recall to reflect an additional 35 million vehicles.

That recall revision more than doubles the size of the original Takata defective airbag recall, making the overall recall the largest of its kind in US history.

More AIRBAG INJURY News
The Honda Motor Corp. is a major customer of Takata. This past August, Senators Blumenthal and Markey cited new test data for specific vehicles that suggested a 50 percent likelihood that defective airbags would rupture in a crash.

Many Americans injured by defective airbags, or having lost loved ones due to a defective airbag death, have launched airbag lawsuits. Beyond litigation launched by injured and disgruntled plaintiffs, Takata last November was levied civil penalties by the National Highway Traffic Safety Administration (NHTSA) of some $200 million, the largest such penalty ever imposed by the regulator.

Investigators into the truck crash have since determined the ammonia nitrate was well-contained within the trailer. However, officials would still like to know why the explosion and fire happened…

If you or a loved one have suffered losses in this case, please click the link below and your complaint will be sent to an automotive accidents lawyer who may evaluate your Airbag Injury claim at no cost or obligation.
Request Legal Help Now

Click to learn more about LawyersandSettlements.com
LawyersandSettlements.com is an online news and information site for the general public and legal community. As a legal news resource, we have emerged as an independent & trusted voice. We provide detailed and quality information on various lawsuits filed including Automotive accidents, Accidents, and Defective Product Cases.